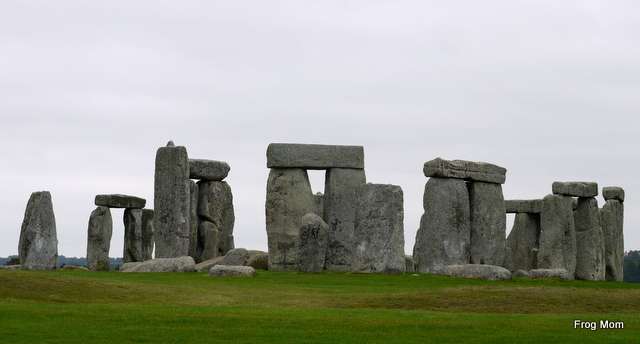 > Visiting Stonehenge with Children – Where King Arthur Collides with Druids

Visiting Stonehenge with Children – Where King Arthur Collides with Druids

Among the many legends connected with Stonehenge is its construction by Merlin. At the request of Uther Pendragon, King Arthur’s father, Merlin would have conveyed sacred Irish stones by magic to the shore of the sea, floated them on rafts across to Britain and set them up on the plain near Salisbury. Arthurians at heart will love this tale but that’s perhaps not the whole story. On a weekend in Wiltshire with my family, we decided to “drop in” at Stonehenge and were blown away by the size and presence of the stone circle. Despite the landscape setting being one of the worst ever for a World Heritage Site – sandwiched between two busy roads with no proper interpretive center – the Iron Age icon is still quite a beast.

Our first glimpse of Stonehenge was from our car zooming down A344 in Wiltshire. There the famous prehistoric stone circle stood – a mile out at most, a small circle of stones surrounded by an ant procession of people marching on the green Salisbury plain, crazy car traffic on both sides. Though I’d read horror stories, I had no idea Stonehenge could be so exposed to the outside world. The massive megaliths were feet away from a long line of cars queuing up for the parking lot. My heart almost broke. Poor old stones. I felt like the sacredness of the site had been corroded by highway planners. Stonehenge being Stonehenge, we still decided to visit the site with our girls but we were outraged it was so close to shopping malls in construction. So we got in the line for the parking lot like everybody else.

Now, where was the entrance? We could see Stonehenge across the road behind a wire fence. Our first reflex was to cross the road to look for the “entrance” to the wire fence but we found none for a good reason – the entrance is elsewhere. We crossed again and noticed a stairway and an alley going to a lower level under the hill with ticket booths and a store, then a tunnel going under the road and leading to a roped path going around the site.

Finally. The legend in front of our eyes. “It’s big!” remarked our girls. And it’s true. You wouldn’t suspect it from afar but walking only feet away from the outside circle stones, you realize that there are much larger than our human being size. Some of them are 6.7 meters (22 feet) high. Imagine carrying 50 tons of stone  with your little hands before the invention of the wheel! From what I’ve read, there were two rings of stones but today you mostly see the outer circle with stones on top as lintels that would have connected a circular gallery above stone doors, and some stone formations of the inner circle. The way it’s designed, you are walking on the circular path around the stones. Far. A few “No entry” signs in the grass clearly mark the boundaries as if the roped pathway didn’t suffice. You’ll never see the stones up close unless … you’re feeling new-agey or more eager than the average tourist. Come back during the solstices and the equinoxes and you’ll be able to walk inside the circle with thousands of like-minded neo-druids. Or book a private tour and get access to the site before or after hours (that would be for the enthusiastic photographers in you).

Now back to the visit. It would help if the site were surrounded by big illustrated interpretive panels showing renditions of the circle through the ages as well as the landscape as it would have been. Even models would be nice. I understand the Salisbury Plain was mostly wooded when the first postholes were erected and the first barrow tombs dug up. Today you’d be hard-pressed to draw an imaginary line where trees once grew.

As far as timing, walking around the stone circle took us roughly half an hour. We took our time, enjoying every single angle on the monument but regretting we didn’t know more about what we were looking at. Ironically, the item that made us understand the early set up of the stone circles was a series of cheesy murals depicting Stonehenge in its heyday. These murals are painted on the walls of the tunnel, monument-side, and we only saw them on our way out. The images really talked to my girls and we spent at least 10 minutes deconstructing them and cross-analyzing them with the actual stone circle. When you go, make note of the murals before you walk out in the open.

How Does the Arthurian Legend Fit In?

It’s not my place to offer scientific explanations as to the origin of the stone circle when historians don’t even know if it was a burial ground, a temple for sun worship or a huge calendar (heck of a calendar if you ask me). However I am die-hard Arthurian fan and had to dig up some facts around the legend. According to Geoffrey of Monmouth, a chronicler of the 11th century, the rocks of Stonehenge were healing rocks called the Giant’s dance and were located in Ireland.

Wikipedia says: “The fifth-century king Aurelius Ambrosius [author’s note: the real-life inspiration for King Arthur] wished to erect a memorial to 3,000 nobles slain in battle against the Saxons and buried at Salisbury, and at Merlin’s advice chose Stonehenge. The king sent Merlin, Uther Pendragon (Arthur’s father), and 15,000 knights, to remove it from Ireland, where it had been constructed on Mount Killaraus by the Giants. They slew 7,000 Irish but, as the knights tried to move the rocks with ropes and force, they failed. Then Merlin, using “gear” and skill, easily dismantled the stones and sent them over to Britain, where Stonehenge was dedicated.”

Now the fun fact is, the stones may actually come from an Irish glacier. According to a 2011 report on geological work by scientists in Leicester, Cardiff and Aberystwyth, “the Stonehenge bluestones are glacial erratics, transported from West Wales towards Salisbury Plain by the huge Irish Sea Glacier maybe 450,000 years ago.” So there is an Irish connection after all! And from Ireland to Merlin, well it’s just a jump I’m happy to make in the name of the Round table.

We liked the monument, it’s obviously impressive and our girls had a hard time believing how old it could be. We didn’t like the highway-sandwich location and the lack of interpretive signs around the site. That said, I would completely recommend the visit to families of school-age children. It’s quite a sight.