Expelliarmus! This was the extent of my Harry Potter spell knowledge until last week and I even spelled it wrong the first time I wrote it – promptly corrected by my 16-year-old daughter. Thank God for children who know their Harry Potter insidus outus. On this last week of February 2020, my brother’s family is visiting from France and after reading the Harry Potter books over a year, they finally get to visit the Harry Potter studios with us near London. Yes, that is commitment and to say they are excited is an understatement. More like, they are ready to rip the walls, grab their wands and quidditch the hell out of the day.

So off we go, on the Tube, then on the Overground, then on the train, then on the bus, to the Harry Potter Studios in Leavesden. It is an uneventful journey, yet you can feel the Harry Potter fever rising – “Are we there yet?”, “Is it far away?” or “Is this the Harry Potter bus?”. As for me, I’ve already visited the studios twice with my girls so am probably more jaded, thinking to myself that the shopping mall look upon arrival is as thrilling as ever. Yay, big parking lot with painted warehouses. 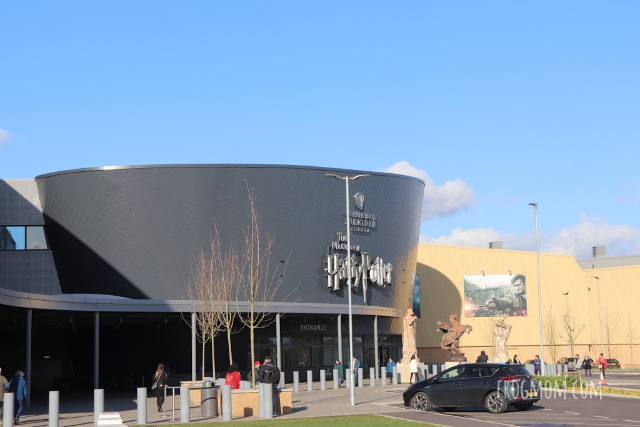 And yet. The organizers have jazzed up the facade with Harry Potter text written in trademark Harry Potter font and illustrated with a photograph of said Harry Potter on film. No mistaking who the hero is.

Our first discovery inside, past detectors, security guards and bag searches, is this Hungarian gentle giant hanging from the ceiling. 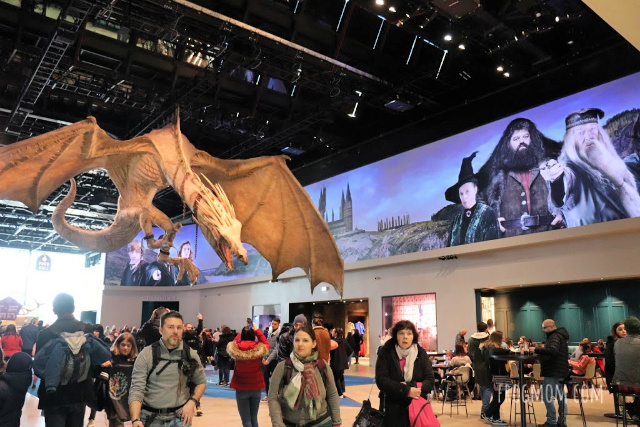 Now. I say that this dragon’s Hungarian because I think that’s what I heard but what do I know about dragons, let alone Hungarian dragons, eh? This one could be from Moldova, for all we know, and only my friend Elina could positively testify to anything Moldovan. Past the dragon, past the first queue (there are a few), we step inside the movie theater to watch all 8 movies back to back without toilet breaks. OK, we wish. Instead, we watch a 20-minute introductory film that I won’t spoil for future visitors. Then, oh then, anticipation at its highest, my 12-year-old nephew is called to the front to push the massive oaken doors of the …. Great Hall of Hogwarts.

Wonder of wonders, the Great Dining Hall where Hogwarts students watch flying owls deliver parcels under ghosts floating around the ceiling. Reality is slightly less magical but still impressive, particularly as the walls are lined with mannequins wearing costumes worn by the actors on set. 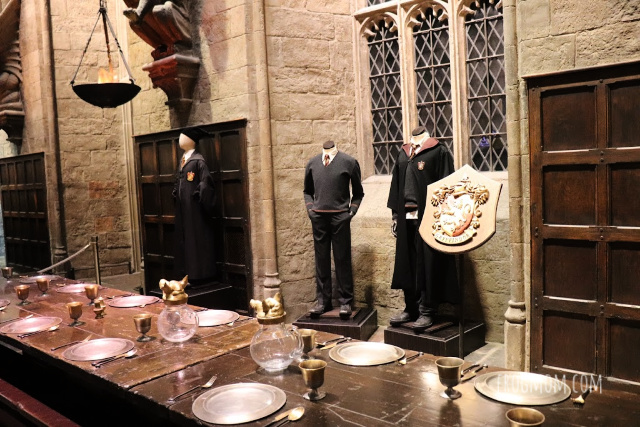 Here, obviously, the Hogwarts robes worn by Daniel Radcliffe in the first movie. More down to earth, my brother remarks, “I like the plates.” He comments on how convenient it must be to have edges inside wide plates to prevent food spillage. Ever the practical eye. Not comment on the piglet jugs. Not convenient enough?

We move on to the next room where numerous TV screens and director, producer, actor interviews could keep us all day if we didn’t think better of it. It’s only the second room and there’s so much to see. Reluctantly, my nice and nephews move on. Clearly, they are enthralled. Past the costumes and resin fake-yet-super-realistic chocolate buffet treats of the Yule Ball (in my favorite movie, The Goblet of Fire), we walk as slowly as possible, reading almost every sign, towards the room with the main Hogwarts sets. 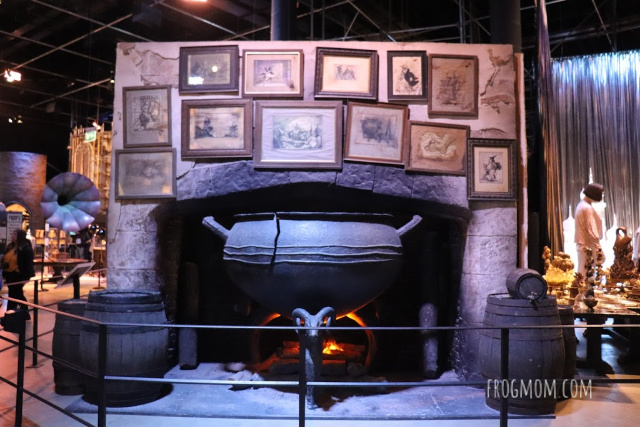 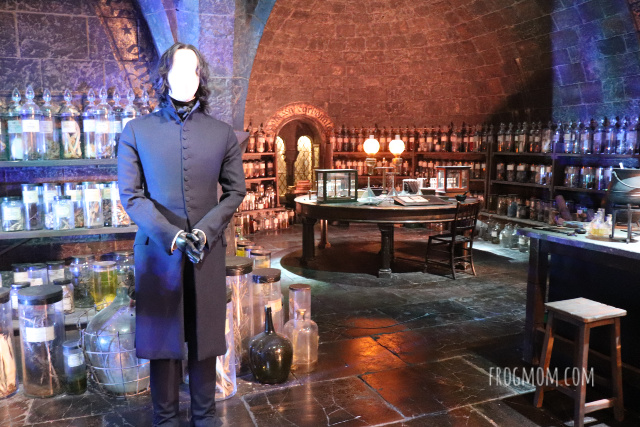 Bless your soul, Alan Rickman. Forever immortalized as the dark villain in Die Hard and Harry Potter, what would the cynical British actor think of his Potions classroom at the Harry Potter studios? I like to think that he would have sneered and secretly enjoyed the magic it brings to kids of all ages. Next to the Snape mannequin, wearing a dandy classy buttoned black vest, ladles stir themselves in copper cauldrons on tables. Blocking out the background noise, I can almost hear Snape saying, “I can teach you how to bottle fame, brew glory, even stopper death — if you aren’t as big a bunch of dunderheads as I usually have to teach.”

Blocking out the background noise takes Jedi-level efforts, though. Right behind the Potions classroom, little feet shuffle around, surrounded by backpack-wearers and other humans. The place is alive with laughter, excitement, shouts, yells, and judging by languages spoken around us, this week is half-term in Germany and in France.

The next part of our Harry Potter adventures sees us enter the dark place that fills young people with dread – the Forbidden Forest. 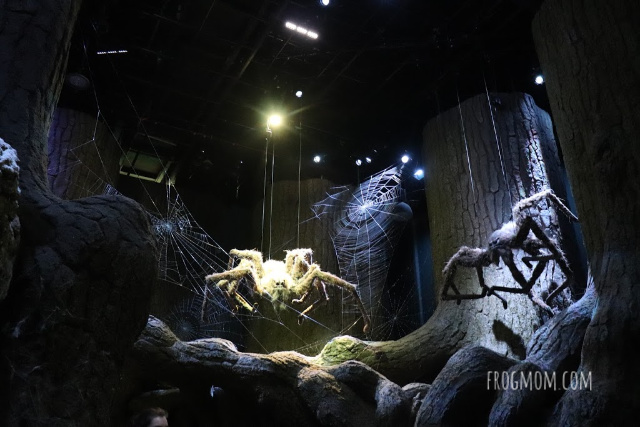 Creepy crawlies galore. Spider lovers are in for a treat, with various versions of Aragog hanging on giant webs spun from sticky threads over visitors’ heads. To scare the sh*t out of kids, one of the spiders is a nifty furry animatronic moving swiftly on a web towards the crowd, then retreating backwards and doing it all over again. Cue spooky music. Yikes! My niece and nephews are brave kids and they don’t shriek, but they don’t step any closer either. Better safe than sorry.

It’s very easy to herd them out of the Forbidden Forest. 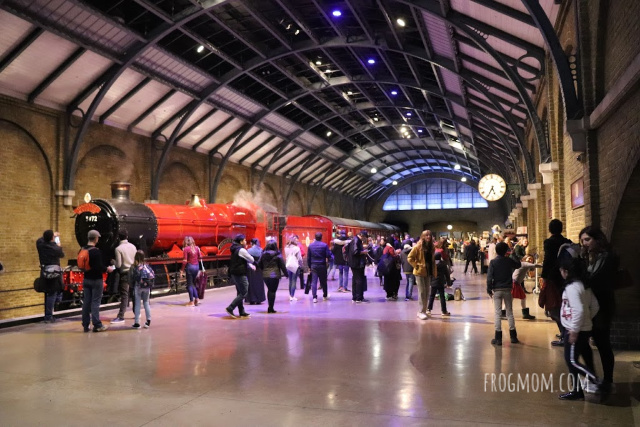 If ever a train conjured the magic of wizard travel, the famous Hogwarts Express is it. What a fabulous old school steam train, waiting for future wizards to board at Platform 9 3/4. If you’ve missed going to Kings Cross in London where you can pose for a picture in front of a trolley stuck in the wall, you can definitely recreate the same moment here with a number of trolleys disappearing in the wall.

My niece and nephews don’t skip a beat and run to the closest trolley for a photograph – and the off chance that they might actually make it to the magical Platform 9 3/4 on their way to Hogwarts. Lucky for us, they stay in our Muggle world and we board the passenger coach to walk past the different cabins recreating sets from the films. Here, the potions book belonging to the Half-Blood Prince. There, the Honeydukes candy trolley. It’s so much fun.

It’s also a good point in the tour to consider how thirsty and hungry we are. 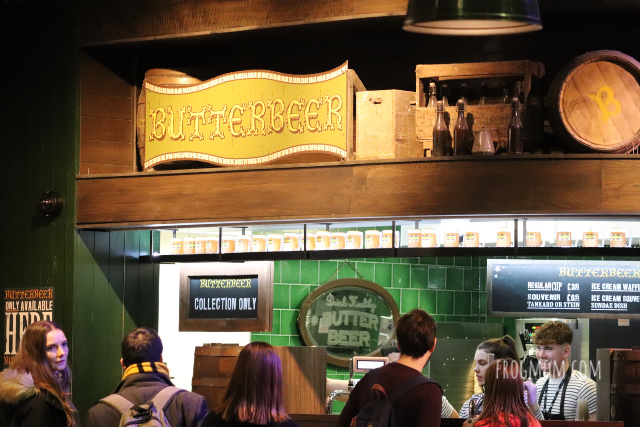 Butterbeer! There’s a butterbeer café. And if you want to taste butterbeer, you can have it in flimsy plastic cups or in tacky solid plastic mugs as souvenirs. We decide to save the planet and not add more plastic junk to landfills. Flimsy cup it is. Would Warner Bros consider using paper cups to lower the carbon footprint of butterbeer? 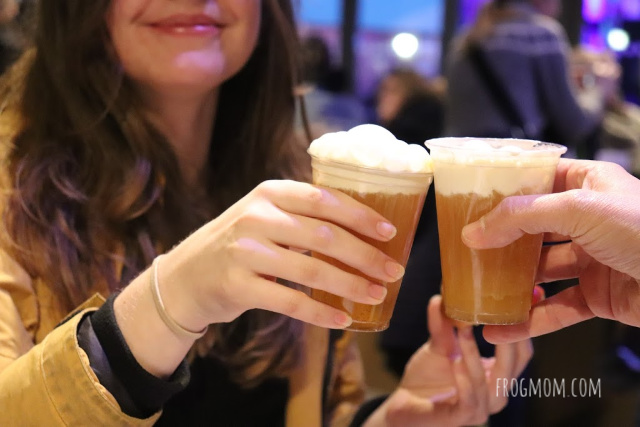 I don’t know if there’s a wizard equivalent to “cheers” but my daughter and my brother toast the tour with two cups of butterbeer, which they proceed to down with roughly the same appreciation. It’s properly disgusting. Forgive me but butterbeer tastes of bad cream soda. Even my niece and nephews, die-hard fans of the books, grimace and ask for water instead. Already when we tasted it on our first visit seven years ago , we disliked it. Obviously, the recipe has not improved. 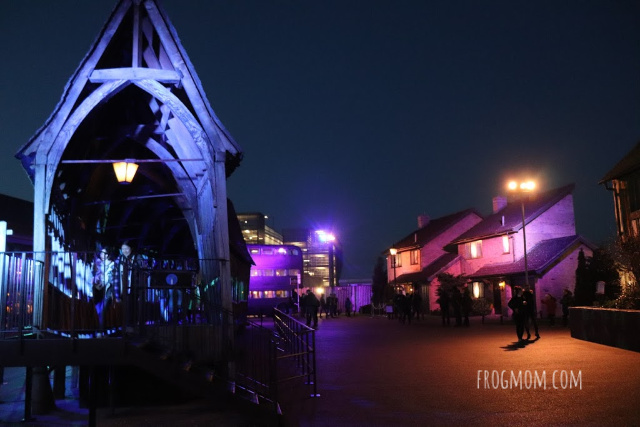 It is a dark and chilly night. Day crowds have left and only a few stragglers remain, roaming around that exterior set. Visiting the sets late is such a good idea. Walking inside the house on Privet Drive, peeking through the windows of the Knight Bus. And of course… 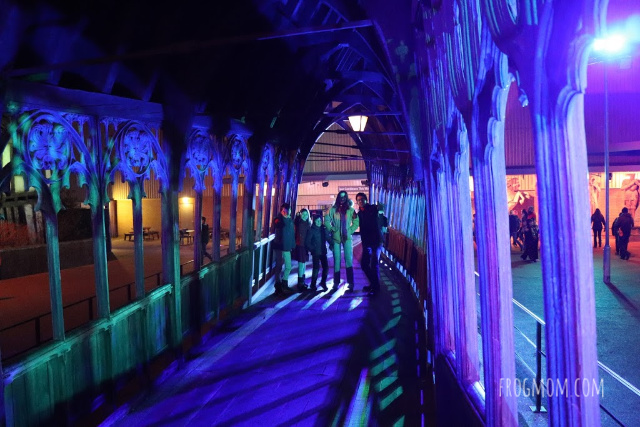 … posing inside the twisted bridge seen in the Deathly Hallows. As I said, it is a chilly night. We don’t linger. On to Lot K. 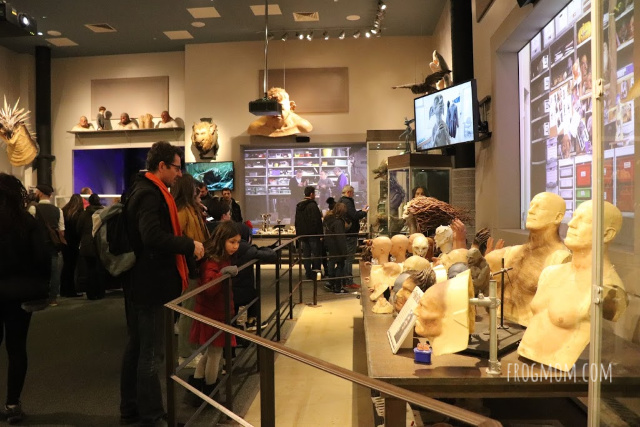 In the make-up room, we learn enough about creating a latex mask for Gringotts bankers, not to try it at home. It is wayyyyyy too long a process. Opposite side in the same room, kids are being goofy in front of screens recreating their movements as animated Dobby, the much-loved house elf. Oh Dobby, why did you have to die? My two daughters still haven’t gotten over Dobby’s death on a Scottish beach. Wonderful scenery, gusty winds, epic sacrifice – tragic story. Having Dobby and Gringotts goblins in the same room is like the ying and yang of Harry Potter. 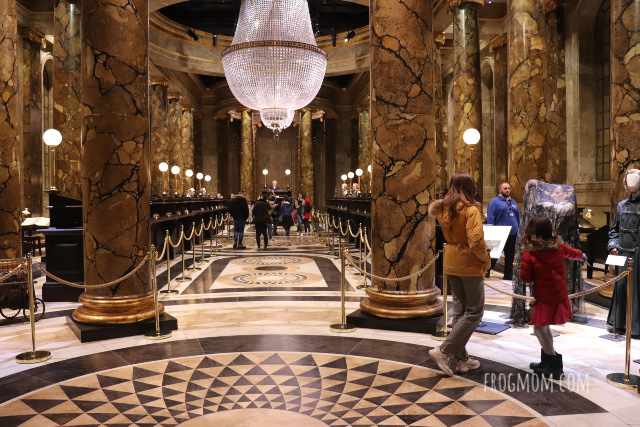 If you have ever wished to walk inside an elegant bank for rich wizards where goblins know you by name and tellers whisper secrets to each other, let’s just say that you’ve hit the jackpot. Decorators have done a bang-up job of creating a Victorian-looking bank with mosaics, fake marble columns and ridiculously high ceilings. It’s Gringotts for you. We’re in awe. 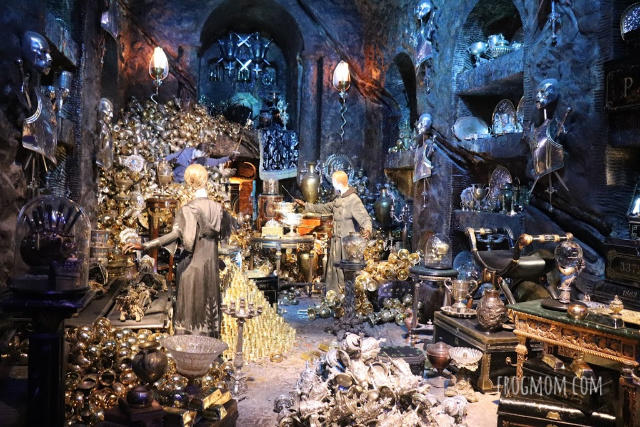 The vaults, now, that place is much closer to a boat-in cave worthy of Pirates of the Caribbean than of a bank. So much gold and sparkles! We’re officially dazzled. Really dazzled. More fairy dust to come. 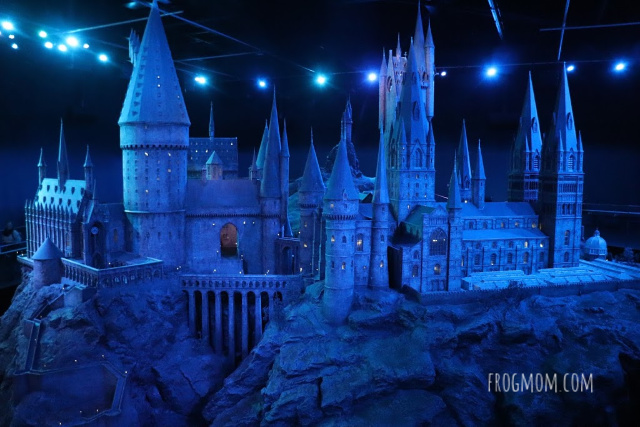 Hogwarts comes next – as a model yet large replica. A young gay couple is taking selfies, sharing their favorite Harry Potter memories with a member of staff. They look so happy to be here – proof that you don’t need to be underage to appreciate this visit. Speaking with the same member of staff, I learn that the winter look of the studios is much more than Christmas trees in the Great Hall or snow falling on the Hogwarts model. It’s winter scenes of many sets, fake snow samples to compare and Chistmas decorations everywhere. That’s it. I want to come back when it’s Christmas!

But before that, one last stop.

Diagon Alley, at last. My niece and nephews are over the moon. Here’s the dusty Ollivanders wand shop, and here Flourish and Blotts, the place where Hogwarts students purchase their textbooks. A voice over the speakers announces that the last bus to Watford Junction’s train station will leave at 8pm. It’s past 6.30pm but they certainly caught their visitors’ attention. People seem to walk faster towards the exit. Only we’re not quite done yet. 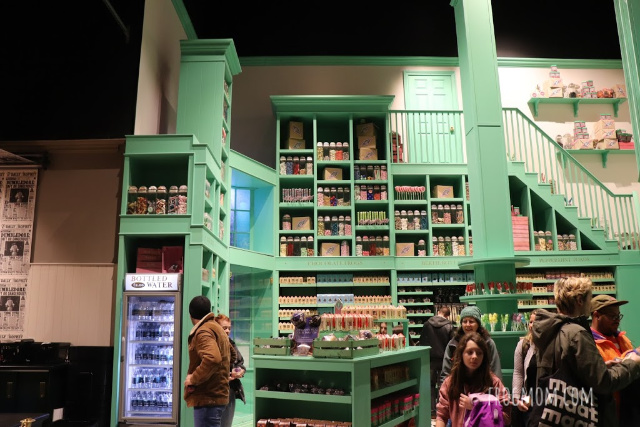 The shop is as iconic and well decorated as the actual tour sets. I can’t speak of the quality of the products, but there’s literally something for everyone. Tee-shirts, chocolate frogs, wood wands, Marauders’ maps – you name it. It takes great self-restraint not to get out of the shop without a bag loaded with souvenirs. Mind you, in an effort to preserve their visitors sanity, Warner Bros have priced everything in the highest possible bracket. That’s actually good for the environment because you look at a tempting knick-knack, stumble upon the price tag, come to your senses and realize you can live without it. Disaster averted.

I’m only being half cynical. All these things will end up in landfills. It’s a nice shop but it still sells something else than pure “magic.”

It’s really dark when we step outside and the queue for the bus is long, snaking from the bus around the bus shelter to the grassy area by the taxis’ drop-off spot. It takes us 30 minutes to finally hop on the bus and another hour before we’re back home in London.

The kids are thrilled. They’ve uncovered the magic of Harry Potter. They still have one book to read and I bet that they’re doubly motivated to know the ending.

Maybe I ought to read it too.

One thought on “Visiting the Harry Potter Studios near London”