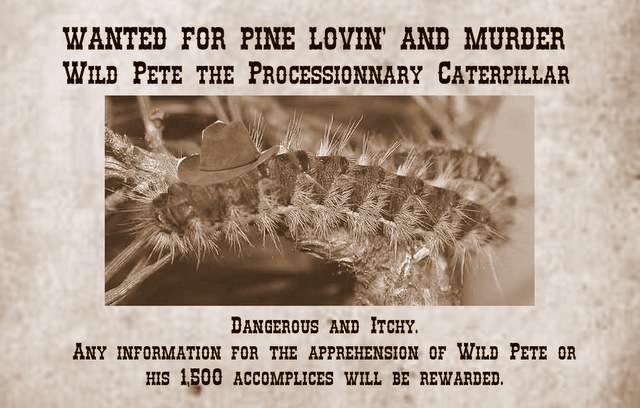 Born the 125th of 300 siblings on a single branch, Wild Pete the meanest processionary caterpillar of all the Wild West forests is on the crawl. Deputy Marshall Loulou, age 9, explored the rocky mountains of Southern France to investigate this reckless criminal whose deeds of outlawry inspired so many other processionary caterpillars. Armed with only a magnifying  glass and a bar of chocolate, Deputy Marshall Loulou the indefatigable detective covered dusty trails with her faithful 7-year-old assistant I-I to arrest the infamous gangster. Their trails led them all the way to Southern France.

The Spirit of the Quest

The commonly-received notion of Southern France pine mountains makes them wild and rugged, made up chiefly of rocky outcrops and steep ravines, having a harsh climate vibrating between a summer blaze and a winter freeze, and inhabited by processionary caterpillars the chief end and aim of whose existence is the depriving healthy pine trees of that valuable and most essential fuel source, the sap. A country, briefly, in every unpropitious to the delicate flower and the peaceful bush, and fit goal only for hardy spirits.

Wild Pete once boasted to a Wilderness Journal reporter he was chum with, ““If you can sting well enough, no one really pays attention to how you spell your name.” Proceshunary? Processonony? Process-how many? Wild Pete stung well enough indeed  and nobody cared how he spelled his name. The reporter who interviewed him had to be transported by stagecoach to the nearest country doctor because he had held Wild Pete and his 299 siblings in the cup of his hand. A bad idea indeed as a quick sketch of the doctor showed a swollen palm with red bumps all over it.

Readers, take heed and never touch the likes of Wild Pete as their hurticating hairs will strongly irritate any skin, smooth as a baby’s, playful as a child’s, or rough as a ranch hand.

“It is the habit of processionary caterpillars to move over the ground in long head-to-tail processions,” said Deputy Marshall Loulou masticating on her bar of chocolate. “They could’ve been called the orderly and stupid bunch for all I know. If you join up the head and tail of the procession, they follow each other in a continuous circle. Beats me.”

Matter-of-factly, Deputy Marshall Loulou then pulled a worn out photograph from her jacket. “Anyhow. See this here crawlie? That’s Hairy Belle – a distant aunt of Wild Pete when she searched a tree to place her eggs. An itchy grub if I ever knew one.” Deputy Marshall Loulou sniffed the air and resumed her story. “She wasn’t good lookin’ or frilled-up or anything but she knew the lay of the land. In one single summer this big hairy moth attached 16 egg masses of 500 eggs to 5 centenary pine trees. That’s 8,000 outlaws on the loose thanks to Hairy Belle. The rightful trees they attacked ain’t havin’ done nothin’ to deserve that. As soon as the caterpillars hatched, they went on a rampage and fed on the trees’ needles. They got these strong mandibles like claws and chewed and chewed until, well… When we found the branches, they were long dead. And Hairy Belle long gone.”

Face Off At the Territory

Deputy Marshall Loulou arrived at the territory by mid-morning with her assistant I-I. They tethered their horses at fences close to the saloon and set out for an uphill walk above a small town whose number of settlers was so ridiculously small they didn’t even bother to count’em. Neither the ruins of a crumbling wall nor the promise of refreshments later in the city square distracted the pair from their mission – finding the elusive and bad, bad, bad Wild Pete. They seemed anxious  to bring justice to the business at hand and an arrest warrant in their pack, cautiously proceeded up the steep sides of the canyon.

“Why Miss,” whispered I-I, “How we gonna find this unruly individual? It’s awfully quiet around here.” Quiet it was. Only pine trees, sage bushes, white blooms and the swish of the wind. Deputy Marshall Loulou sniffed the air yet again, squinted her eyes, and tipped her head in the direction of the pass. “Exactly I-I. It’s quiet and I gonna take advantage of that quiet. Where some coffee boilers prefer the ease of a rocking chair, I go for the unexpected. ”

Thenceforth Deputy Marshall Loulou produced the paper out of her pack and started reading the arrest warrant to the hills, so loud it echoed against the canyon walls. “Wild Pete, you’n your lowly scalawags bunch are accused of wrong-doing in these here territories. You murdered innocent trees and sucked the life out of them, needle by needle. Crawl peacefully into our bag and you will not suffer until we deliver you to the chief justice. Pull any processionary or itchy tricks on us and you’re as dead as a nail on a cactus moon.” I-I nodded gravely, “Rightly said, Miss.” Only the swish of the wind followed the declaration – the swish of the wind and an imperceptibly low humming sound.

“Hush,” said Deputy Marshall Loulou, “Can you hear that?” I-I opened her eyes and widened her nostrils but couldn’t hear more than before. “That low humming, I-I. There’s varmint in them thar hills. Them little criminals are sleepin’, I-I. They’re sleepin’ and dozin’ and digestin’ their kill of last night.” Deputy Marshall Loulou cast a roundabout glance at the hills and I-I slowly turned around but I-I could only hear the swish of the wind. Both lasses walked around a big rocky ledge, lay down flat on their stomachs and crept to the edge of the slab. Loulou’s gaze caught the nearest pine tree and stopped in front of a white bloom. Or rather, a silky white nest that looked like a white bloom.

Deputy Marshall assistant I-I gasped. “Their hideout!” Immediately she covered her mouth and looked at the hills like they had binoculars pointed at them. Deputy Marshall Loulou waved her worries away with a sigh. “They’re sleeping like logs anyways. Talk all you want. Nobody gonna hear ya.”

“Then why did you read the warrant?”

“Cuz I like to. It sounds more official. Now let’s get to work.” Pulling a small pocket knife from her backpack, D.M. Loulou slipped down the rock to the tree and raised her hand at branch level. I-I stepped back and watched with disgust as Loulou surgically slit open the silky sticky tough-as-jerky pouch. “Come on I-I, cowboy up! Our creepy friends just need a hand to open the door,” explained Loulou clenching her teeth, working hard at slicing the nest open. Quarter inch by quarter inch, the knife opened a vertical line into the silky nest. When it reached the bottom, the nest spilled open like a bag full of grain. Caterpillar eggs avalanche!

“I-I, quick, my magnifying glass!” said Deputy Marshall Loulou. Grabbing the glass, she pointed it on the inside of the nest where a big fat caterpillar was starting to curl back inside the sticky webby hideout. Fragments of pine needles were scattered everywhere inside the nest. Deputy Marshall Loulou took out a new chocolate bar from her pack and chewed on it pensively. “Nope, this is not Wild Pete but ’tis a good catch nonetheless. We’ll take the nest with us.”

Minutes later, the two Wild West detectives were on the trail again, carrying a burlap bag out of which a newly-cut branch stuck out. Clearly, these mountains were still not big enough for Deputy Marshall Loulou, the indefatigable detective and Wild Pete, the meanest caterpillar of the Wild West.