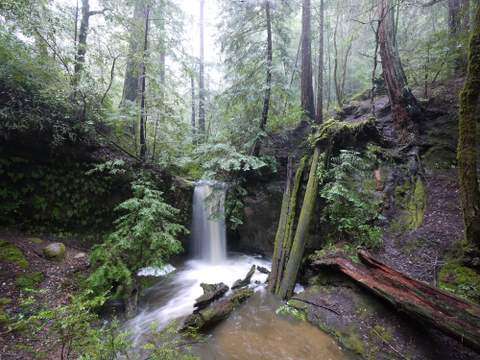 Who says hiking in the rain can’t be enjoyed? For one, you’ve got the trail to yourself and kids can deploy their umbrellas without hitting crowds of visitors – a huge plus in a park as popular as Big Basin Redwoods State Park. Two, waterfalls are double the regular size and that makes the photographer happy. Three, surprises in the form of fallen trees, hail pools and impromptu streams crossing the path add some spice to the itinerary. In the family-friendly section, I selected a trail where I could tell a nice story to my girls.

With its quiet groves of mossy old growth redwoods and trails lined with arching ferns, Big Basin Redwoods remains a breathtaking place. This quintessential Northern California quality is the reason we hiked at Big Basin Redwoods last Saturday, on a stormy day that wreaked havoc through the Santa Cruz mountains.

Our friend Jerry was visiting from Virginia and I wanted to show him a place that would say “I can’t be nowhere else.” Redwoods were an obvious choice but Muir Woods was out as Jerry had already been there. Since the weather forecast was to be rain on Saturday and Sunday, I opted for a park where we could see redwoods and waterfalls so that the rain would serve a purpose. For my girls, I knew a historical site along the way where I could tell them how an 11-year old boy built a pioneer cabin with his dad out of a single redwood tree. They would like that. Hence Sempervirens Falls, a moderate 4.5-mile loop from the park headquarters.

We started late, rerouted by the closure of Highway 84 (fallen trees and dangling wires) and a few rocks on the roads. We hit Sequoia Trail easily, finding it right next to the park headquarters. The Big Basin unofficial website has some great historical tidbits on the trail.

Sequoia trail was originally called Roger’s Trail after an early homesteader who settled in this area. Later, the portion of the trail that connects Slippery Rock to the upper end of Opal Creek was known as Trail Beautiful. This section of the trail was cut in 1895 to accommodate the trains of pack mules that hauled over 800 cords of tanbark that year to the wagon road at Slippery Rock. Remember the tanbark business because we’ll come back to it at the Maddock Cabin site.

So far the trail was soggy but not flooded and the diffuse light of the cloudy skies added to the charm of the redwoods. We were surprised to find white little marbles in pools under trees or bushes and wondered what they were. “Hail!” said Jerry, who bent down to check. I was amazed that hail had resisted almost a day in the rain because the hail storm took place the previous night.

Hugging the paved road pretty close, Sequoia Trail led us through groves of crazy redwood trees, lots with sizable open caves inside that invite little gremlins to go and explore. When you go, bring a flashlight for your kids so they feel safe bringing out their inner Indiana Jones. Other redwoods were completely burnt by fires except for a circle of stumps. Chimney Tree is a cave tree that smoldered for 14 months in 1904 before it blew its top, leaving a hollow but living tree in its wake.

I had fun taking cover from the rain in such a tree cave carrying my 5-year old who kept saying “Mom, let’s get out of here, the tree trolls won’t like it.” For some reason, she is spooked out by  redwood caves. Too dark for her + chance of spiders + springy needle floor = where’s the way out? We continued our way and since there were no cars on the road, opted to go for drier ground until the falls.

There they were, Sempervirens Falls, named after the Coast Redwood’s latin name – sequoia sempervirens, everlasting sequoia. Now for the history bit. Big Basin Redwoods was the first California State Park founded in 1902. Until then, it was private property destined to be logged – like a lot of the Santa Cruz Mountains.

Andrew P. Hill, a San Jose photographer, contacted the president of Stanford University, other influential people and founded the Sempervirens Club. In 1900 the club camped near Sempervirens Creek and its members even went fishing in the pool below the falls. They passed a hat, collected $32 to finance their efforts, and launched a fundraising and lobbying campaign to achieve their goal. Two years later, Big Basin Redwoods was preserved for public use. Yay!

Think of that as you marvel at the five-fingered ferns along the banks and cliffs of the falls, and the  towering redwood trees. The fenced observation platform makes it easy to get a good access over the falls, a nice plus for kids. Now cross over the road and go north on Sequoia Trail.

You will find Slippery Rock on your left a few hundred yards or so from there. At the base of Slippery Rock, ask your kids to look for the Founders Monument, because this is where the $32 hat collection episode took place. When you feel ready, walk up Slippery Rock. Yes, up. This is the trail, believe it or not. Goofy pictures optional.

My girls enjoyed finding hollow pools carved by the passage of time on the rock, a huge exposed sandstone slab about 200 yards long and 100 yards wide, tilted at a 30-degree angle. Why slippery? The rock earns its name from the underwater springs that seep through the ground and flow down the rock’s smooth surface. Watch your step, some of it really is slippery.

At the top of the rock, find a tiny trail on your left. It goes under tree cover, bends sharply left at a trail sign, and lands you on … a road. What? This is the old tanbark road created in the 1880s to haul tanbark out of the basin.

At this point, the idea is to follow the road to the Skyline-to-the-Sea trail through a magnificent redwood canyon. It’s mostly downhill and the trail can be narrow so watch the kids. We hit a fallen redwood tree on that portion but walked around it without difficulty.

On and off you will hear the roar of a creek flowing below. It’s Opal Creek, a creek that has its tame and raging moments depending where you catch it. The trail sort of loops back and to continue on to the Maddock Historic site, you must turn right at a bridge where the signage can be confusing.

A sign tells you to go left to reach the park headquarters via North Escape Road. Huh huh, go right I say. Cross the bridge and take a left immediately on a series of round stumps that lead to steps, on the Skyline-to-the-Sea trail. You’ll enjoy a much more scenic stroll here and you get to stop for a snack at the interpretive sign that marks the location of the Maddock cabin.

Read the sign to your kids, the bits on the tanbarn oak is quite interesting. The Santa Clara Valley hide business was based on tanbark oak from the Santa Cruz mountains. On the other side of the panel is a faded photo of the original Maddock log cabin, the cabin built in 1883 by an 11 year-old boy and his dad with axes, a redwood tree and not much else. Kids, if you only knew how easy you have it these days! All that’s left of the cabin is the fence and a redwood log but the photo does speak to the frontier imagination.

After this educational moment on the virtues of hard work, continue on the trail. You’re only 1.6 miles away from the park headquarters and it’s all easy terrain. If it’s raining, look for newts around the creek, generally under logs. We didn’t see any but then at this point, we were more focused on reaching a dry spot to remove our wet shoes.

Had we been hiking in beach clogs, the result wouldn’t have been much different except from the squelching sound of the wet socks inside our wet shoes. I thought that my girls were going for a meltdown but when we told them we were minutes away, we resuscitated and kept the momentum. Parts of the trail were literally impassable on dry ground, converted into creek beds by the rain, so we carried the girls on our back to avoid them getting wetter.

The supremely rational 5-year old kept protesting, “But mom, why can’t I walk in the puddles? I’ve got wet feet anyway.” Silly me, I preferred that she avoid the complete foot bath until the car. “Mom, I like puddles.” I considered her offer. Too late. Splash! Fine, why not let her choose her path since she enjoys puddles so much. Besides, I had a dry change of pants, socks and shoes in the car.

Close to the end of the trail, we hopped over an impressive fallen redwood tree. Not impressive by its size (though it was no teeny bush), but impressive by how red the inner bark was. I hoped that the park’s gift store would still be open so that I could buy a dry top for my 7-year old (whose raincoat has since been recycled due to its poor performance) but on weekends it closes at 4pm and we were way past that time.

We finally reached the headquarters and hopped in the car. You’d think the girls were tuckered out and ready for bed. As it turns out we were headed to a friend’s party nearby and they had the time of their life playing on a toy kitchen all evening. Kids are made out of steel, wow.

You don’t need to do this hike in the rain – no really, it’s OK dry too – but for a fuller waterfall, it’s best to visit a few days after a heavy rainfall. It still flows in the dry season, but not as impressive.

One thought on “Waterfall hike at Big Basin Redwoods”