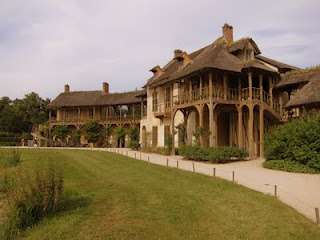 > Welcome to the Storybook World of Versailles

Welcome to the Storybook World of Versailles

Was Marie-Antoinette the first celebrity mom to implement the farm-to-table concept? While the Château de Versailles is better known for the glitzy Hall of Mirrors or the imposing King’s bedchamber, the northern end of the park conceals a hamlet of thatched-roof cottages surrounded by vegetable gardens where the queen’s farm supplied veggies and dairy products to the royal children. Savagely destroyed during the French Revolution, the Queen’s Hamlet has been slowly massaged back to health and is now a hot spot on the Versailles circuit.

After a long day of shopping in Paris, I took the car and did my girls a favor by taking them to this enchanting world where ducks, pond carps and baby goats are now resident royalty. Despite the imposing lines at the front of the castle, this hamlet was near empty and provided a much appreciated breath of fresh air. The best part? We rented a small electric car to get to the hamlet from the castle.

Inspired by the village at the Château de Chantilly, Marie-Antoinette asked Louis XVI if a country escape could be built for her children. From 1783 to 1785, architects and small hands were hard at work, digging a lake, planting vineyards, building a fully functional dairy farm. Of the 12 cottages that rose from the ground to house and entertain the queen and her entourage, only 9 remain today.

Though 12 seems like a small number for a castle as big as Versailles, the hamlet was never meant to be the court’s country club – much on the contrary. You strolled the alleys of this village by invitation only and it had to come from the queen. So there. What you see today is an exclusive country getaway, one that was meant to be shared with family and friends and whose happy hours lasted only four years.

We rented our electric car in front of the castle and my girls giggled as we made our way down the wide alleys, around fountains and along cobblestone roads to the Petit Trianon. The little car is so silent and slow it was like an oversize toy – definitely a plus for kids. We parked at the Petit Trianon, exited to the garden and followed gravel paths along a creek. Soon the first buildings emerged between the green foliage of the historic garden.

“Girls, check this out!” I yelled. Surrounded by the storybook cottages, the lake is a lovely sight. My mom sat on a bench and we tried to figure what the building behind us was.

“It was the mill,” a man replied. I looked at him. Dressed elegantly, he talked behind an uneven row of crooked teeth. “Come, I’ll show you” he added. Turns out he was one of the castle’s guides.

With a name like that and a water wheel, I figured the mill must have been used to grind grain day in day out. Not so. Ironically the Mill was a house whose rural attributes were purely decorative. “Everything’s ruined inside,” said the man, “It’s not even safe to go in.” Too bad, a peek would have been nice.

The queen’s house with an elevated walkway and a billiard room was the masterpiece of the hamlet. Lavishly furnished, it featured a dining room on the ground floor, a guard room, a game room and a parlor upstairs. “We even hosted a small private party here last week,” confided the man, showing a wooden door. A private party at the Queen’s hamlet? Wild images popped in my head, dancing on the soundtrack of Sofia Coppola’s Marie-Antoinette movie. Wow! I wanted to know more but the man politely changed topics to talk about the condition of the buildings.

Though the Queen’s Hamlet has been an integral part of Versailles since 1784, it was abandoned after the French Revolution and restored 3 times before opening to the public in 2006. Yes, a few centuries of time out will leave a building pretty depressed. The spiral staircase of the Queen’s House looked strikingly fragile. “It’s broken,” observed my 6-year old. “They should take better care of it.”

Sweetie pie, if you only knew. They are taking good care of the buildings but they’ll need more piggy banks to save it from further degradation. “You see the low walls in the garden over there?” asked the man, “they trace the footprint of the destroyed cottages. The plan is to rebuild them.” Aw, that’s good news.

We arrived in front of a darling house with a creeping wisteria surrounded by a sea of greenery, cabbages, chards and beets. “This was the dove house,” he explained. Literally this building is where Marie-Antoinette kept chickens, pigeons, roosters and doves. Nowadays, it would be an upscale chicken coop. Oh the sweet life of a feathered breast!

We kept going and the man asked, “Have your daughters seen the farm?” When I said no, he urged me to go now. “It’s now an educational farm for the city’s school children. On the way, peek inside the milking barn. It’s still furnished.” I knew I must not keep the man captive so I thanked him for the tour and we headed for the farm.

Next to the Marlborough Tower stood the milking barn. Well, barn, you see what I mean. This is Versailles, not Kansas. The only piece of furniture I saw was a big white marble table. Technically, milk was not pasteurized and treated in this barn but in a neighboring building that has since been destroyed.

The existing milk barn was a tasting room where the queen and her children enjoyed fresh milk out of white china pitchers and cups. Though the original marble table was smashed during the revolution, this faithful replica was rebuilt under orders of Napoleon. What a fantastic table! I want Pottery Barn to make one for me.

Beyond a patch of vineyards and a green tunnel, we reached the farm. Big fat rabbits hopped in the underbrush, safely sticking close to their wooden pens. Inside the farm yard, my 6-year old squealed, “A piggy!” A plump pink pig was slouched on a comfy bed of straw. My 7-year old ran to pet a donkey. The old man was right, this is where kids belonged.

More animals grazed peacefully, such as these goats, cows and a couple of horses. There’s definitely something to be said about being a school kid in Versailles! Not that the Hayes Valley farm isn’t cool, but this is another world.

After a little roaming around, we came back to the lake and saw the same man glancing over someone’s shoulders under a bridge. We got closer. “What’s going on?” I asked. He grumbled. “It hasn’t rained enough this year.” He showed the water lilies. “The lake’s level is low, the lilies have taken over the lake and the fish have multiplied.” He shook his head. “Eeew!” said my girls. True, the sight of so many gaping carp mouths was a tad gross.

“We want to go back to the electric car!” said the girls. I looked at my watch. Oops, time to come back home. “Let’s go girls!”

We found my mom on the same bench, gazing quietly at the lake. “How was it?” she asked. It was so nice. I’m glad I waited an hour in line to rent this damn electric car. It was well worth the wait. We hopped back in the car and came back to the castle, admiring the sun glow on the grand canal where visitors rowed their boats. Summertime, and the living is easy in Versailles.

3 thoughts on “Welcome to the Storybook World of Versailles”