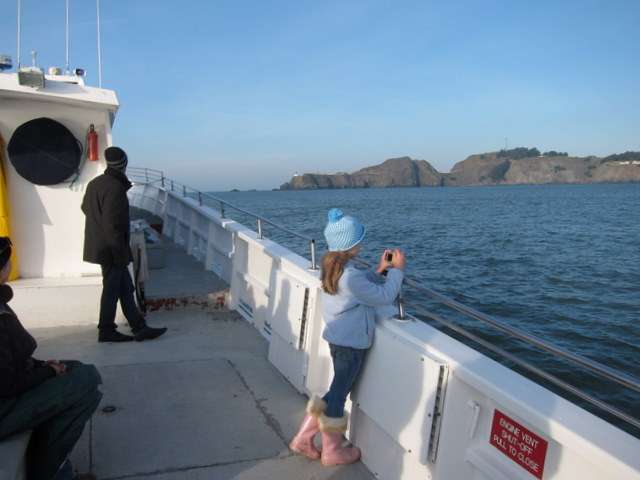 > Whale Watching with Children at the Farallon Islands (Video)

Whale Watching with Children at the Farallon Islands (Video)

“There goes the tail!” said the naturalist on board of our whale watching boat off the Farallon Islands. The kids were glued to the sides of the boat, waiting for Moby Dick to resurface and wave at us with its giant fin. Think about that – the largest mammals on earth, barnacle-encrusted animals who travel 12,000 miles from Alaskan waters to the Mexican coast during the winter, there they were a hundred yards away. They could have been swimming under us for all we knew. It was National Geographic right in front of our eyes.

Whale watching was something I’d wanted to experience with my girls since they were toddlers but they had to be old enough for the journey. After all, whale watching is a lot of watching, a lot of boating, and if you’re lucky a few moments of sheer animal kingdom happiness. When they were respectively 5 and 7, we booked a trip with San Francisco Whale Tours. On a crisp February morning, we met up with my friend Ashley and her sons at Pier 39 in San Francisco and proceeded to the boat Kitty Kat. Our kids all had extra clothing layers for warmth, a lunch bag with snacks to last through the half day out, and some activities for the long ride out.

Our destination: the mythical Farallon Islands. A marine sanctuary, the Farallones are a group of rocky islands 27 miles out the Golden Gate Bridge. Nobody ever sets foot on the islands but scientists. It’s closed to the public. However you can circle the islands on a boat and imagine the life led by the PRBO scientists. These guys have to bring in everything they’ll need on the islands, including water and a rich interior life. It must get lonely on these rough waters surrounded by the vast blue sea, seals, cormorants and sharks.

Reaching the islands was not as bad as I had anticipated, given the reputation of sea-sickness of the Farallones. Our kids were wearing seasickness bands and had swallowed pills, which I have to say worked wonders. None of us got sick that day. Just as we were leaving the Golden Gate Bridge and passing Point Bonita’s lighthouse, a group of shiny black fins surprised us in the water. Up and down they were going in perfect dolphin-like motion. “Dolphins!” I said. “No, porpoises,” corrected the naturalist who was on board. So these were the famous “un-whale un-dolphin” sea mammals who people regularly saw in the San Francisco bay? Indeed, their dorsal fin seemed more triangular than that of dolphins yet their bodies were rounder and stouter. What a hoot!

Farther off the coast, a couple of dolphins followed our boat during 20 minutes or so. Dolphins, how fun is that? The children took over the rear deck and leaning slightly over the railing, took turns pointing at them with their fingers. I wish I could have gotten a clear shot at the dolphins with my camera but they were too “jumpy” and each time they came out of the water a big wave blocked our view. At full speed against the wind, our boat was definitely giving us a rough ride.

Right before we reached the Farallones, the naturalist came inside the cabin and explained to the children – who were busy being bored – fun facts about gray whales. With a model whale, he showed them the diving motion and what we were likely to see on the surface. Here’s the nose, here’s the fin, here’s the tail. He told them about the double blow holes to breathe and the crusty snouts covered in barnacles. I was so happy they were listening because they would remember a fraction of what he said. To make sure, I filmed his explanations and it’s part of my video.

At last we heard the much-expected “Whales!” shouted from outside. We rushed out of the cabin and squinted to spot blow holes in the distance. They were coming closer! I captured a few of them on film but off camera, we were treated to maybe 10 minutes of diving and air blowing, catching glimpses of the whales’ heads and tails on and off. After the show was over, the two whales took a last breath, a deep dive and we never saw them again. They had altered their route and we couldn’t find them again even after the 30 minutes they’re supposed to dive to feed. Still, what we’d witnessed was unforgettable.

After a few last minutes observing colonies of seals lounging on the southern Farallon Island with binoculars, we began our journey home and two hours later reached port. This time the wind pushed us and the ride was much smoother. What a day! Now here’s the video I made where you can see our ride, listen to the naturalist, see some of the Farallones’ rocky coast and finally the whales. Enjoy!