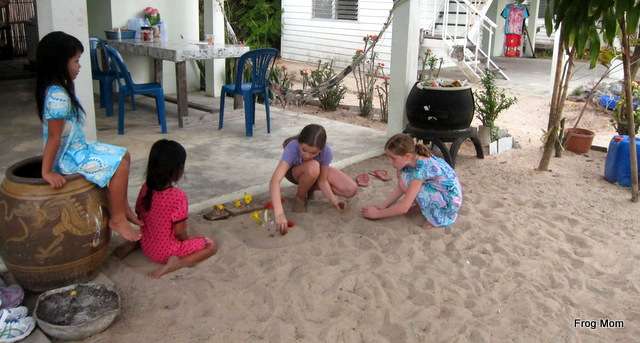 > When Kids Grow Up On Tropical Islands Without Electronics

When Kids Grow Up On Tropical Islands Without Electronics

“They’re not attracted to the TV screen,” observed my 10-year old daughter in disbelief. Last week we stayed on the remote Thai island of Koh Phrathong where electricity only comes between sunset and 10 pm, so residents of Lions Village can socialize after dark. What my daughter said referred to the six village kids playing around her and her sister, ranging in age from three to 11 years. While adults next door gathered with sodas in front of a TV blaring Thai soap operas, kids simply played on. In fact, they spent hours with my girls with only hand gestures as a common language and it was one of the best times my girls had on the island. Over the next few days, my girls met another local boy who was 12-years old and played a full morning and evening with him. We loved the creativity of these kids and how refreshing their perspective on play was. When you have no ipads, no smartphones, and no gadgets at home, this is what happens on tropical islands.

1. Nature is the best toy store

Dolls, trains, legos, costumes – these kids have almost none of that. Oh, some plastic crap does make it on the island – they’re not living in the dark ages. Around Lions Village, we found a few discarded plush toys, broken plastic planes and aged plastic cars – mostly buried in the sand that covers most of the island. Paper and crayons looked quite tricky to get by, so those seemed to be restricted to school assignments. However when things got serious in the play arena and my girls started interacting with the children (despite mine not speaking Thai and them speaking neither English nor French), these are the items they played the most with:

– Half coconuts: used as mold to shape sand in constructions or as container.

– Sand: largely the best blank slate for any kind of game. Used to draw lines, dig holes or build stuff.

– Charcoal: used as solid paint to draw on wood or stone.

– Sticks: used for fighting and building.

– Broken wood: used as trays to carry or display stuff.

Broken wood, old tires, plastic bags, empty bottles and cans – every day trash life in the village. Close on the footsteps of natural items, discarded pieces of trash find second lives as arts and crafts material for local kids. You know, the bottle metal lids of beer bottles? With their round shape and bright colors, they make fantastic “buttons” to decorate any sand castle or mark lines on the ground. Soda can aluminum pull taps make fun rings. Old magazines? Torn pages are used by kids for scribbling and drawing. The most popular item, surprisingly, is old plastic yogurt containers. These are just the best to use as molds for wet sand or as containers for various tidbits.

It’s ironic how in our western world, we spend ages pondering over “re-using”, “”upcycling” or “recycling.” On Koh Phra Thong, where the trash collection system is a pickup truck driving onto the beach in reverse to load a truck-full of trash onto a long-tail boat so it can be taken to the mainland for processing, trash is not an easy matter to deal with. So if something useful catches your eye, just use it.

3. No need for kid-sized bikes

As the closest town is 90 minutes away by boat, everything that’s brought on Koh Phra Thong is well thought through. On the island, kids get around on foot for short distances, but for fun or to go further afield, they also use adult bicycles. When my girls were playing at Lions Village, they were astonished to see a petite six-year-old girl called Nongmai hop onto an adult-size bicycle and ride away. “How does she do it?” they asked. Nongmai seemed so tiny on the bike, yet she rode it like a breeze. I’ve seen kids in Cambodia do the same thing. Since their legs are too short for them to pedal and sit at the same time, they simply pedal standing up all the way. They can even pedal after another child hops on the rear rack. Interestingly enough, the village counted baby trikes for toddlers but no mid-range bikes for grade-school kids. They transitioned directly from the tricycle to auntie’s bicycle. Needless to say, my girls were very impressed.

After he lost a game of thumb war with my 10-year old daughter, a 12-year old boy named Somai ran to a young tree, climbed a few feet off the ground, hung from a branch with one arm and howled three times. “He does that when he’s upset,” chuckled my daughter. Jeez, I thought, Mowgli is alive. The kids had been playing thumb war a few times that afternoon and apparently, were evenly matched. Now, thumb war is not necessarily a game that we play a lot at home but over the next few days, it became the game of choice with kids and adults alike. Whether you count to three or to ten, you only need a hand and the willingness to play. Too easy to resist.

Playing tag is a kids’ favorite on the playground, but playing tag in the ocean? Yes, you read that right, feet in the water up to the knees. On Koh Phra Thong, my girls played tag in a shallow bay with Somai right in front of his mother’s restaurant hut, Coco Beach. The funny thing is Somai knew the bay so well that he showed my girls the boundaries where they were allowed to play. For instance, they were to go nowhere near the fishing boats or the boats’ floating buoys. He meant it like it was dangerous. I guess it was because of lines with hooks or maybe some depressions in the bay floor. Whatever it was, he made sure the three of them played tag where he deemed it safe. They had a ball but as reported by my 8-year old, “it’s very tiring.” That, I can believe.

Somai didn’t know many English words, but he could identify all the birds that flew overhead. As he and my girls were about to play hopscotch in the sand, he stood still and said, “Hornbill.” We weren’t sure what he meant but he repeated “hornbill” and pointed to the pine trees beyond the sandy beach. We heard a bird’s call but could see no birds at all. “You! you!” he said, and Somai motioned for us to follow him in silence. Listening to the bird call, he went a hundred feet inland quietly on his tip toes, then turned left in a clearing and looked up. Triumphantly, he pointed to a tree. “Hornbill!” Oh, the smile on that boy’s face. Roughly 10 meters off the ground, was a mature hornbill perched on a branch. It was simply amazing. I’d never seen someone follow a bird call without devices until their found it without binoculars. That’s a nature child for you.

7. So you think you can hopscotch?

The game that totally blew us with Somai was hopscotch. His version was quite different from what my girls knew and a lot harder. Since he was a cheeky monkey and an experienced hopscotcher, my girls were worried they didn’t stand a chance but they were wrong. Here’s a rough overview of the game. The hopscotch sand “board” looked quite regular except it had numbers as well as letters and featured 10 squares. Using seashells as units, the kids took turns throwing them in the squares until they landed on the first ((and subsequent) square, then skipped over the squares on one foot and picked up the seashell to bring it back. Since the seashells were round-ish, throwing was quite challenging as they bounced off the hard-packed sand more often than not. Mid-game, my 8-year old gave up and drew her own hopscotch so she could enjoy her own version of the game. My 10-year old took a while to get the rules but once she did, she persisted. Slowly, she and Somai made it up the squares until the final level. There was so much bouncing off the sand that the game took over an hour and the boy’s father, getting off his fishing boat at sundown, stood with me to watch the game for a bit. Finally, my 10-year old reached the last square and the game was declared over. It was probably a strike of luck, but Somai was annoyed and in true martial art fashion, kicked the sand and did a crazy handstand to express his discontent. Such a wild child!

Hopscotch concluded the games my girls played with children on Koh Phra Thong. As you can see, entertaining my girls without electronics was in fact quite easy with the right environment – accessible outdoors, warm temps and friendly local kids. I too, grew up on a tropical island and watching the kids play brought back great memories. Thank you, Koh Phra Thong, for showing us that some kids still know how to play without electronics. It’s a rare and precious thing, these days. Please don’t change.