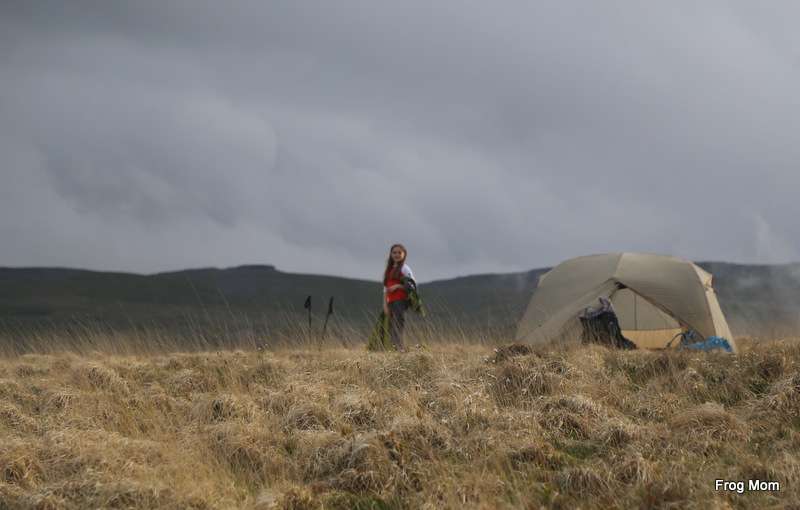 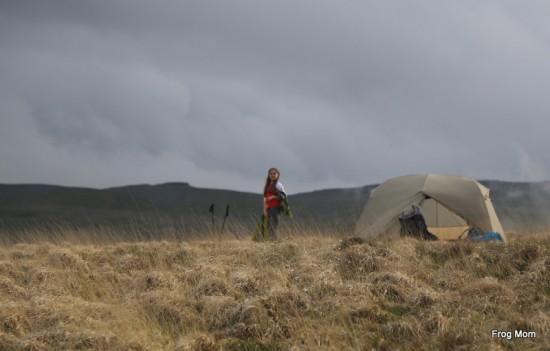 To anyone who’s new to backpacking in the United Kingdom, it’s all a bit perplexing. Legally, there aren’t many places you can go except the Dartmoor and Scotland. In England and Wales, you have to trust unofficial reports that  you can backpack pretty much anywhere, provided that you are discrete. As you can appreciate, I was thrown off and during three years, pondered the pros and cons of engaging into “discrete” activities with my girls. The great outdoors finally won and I decided to dust off our super-light family tent and take everybody to Wales for the May Bank Holiday. Hence a wonderful wild backpacking weekend with kids in the Brecon Beacons!

The “wild” in “wild backpacking” refers to the fact that we were free to pitch anywhere, since it wasn’t legal anyway. It’s also the tricky part, because you have to find a good spot. The “with kids”, that’s because we went as a family with our two girls, ages 9 and 11. The “Brecon Beacons,” that’s a national park in Wales that you must promise to explore in you can. As for logistics, read on. I’m sharing all this so that you too, even if you are on the fence, can take a step forward and plan a similar adventure with our kids. I promise it’s good family fun and roughing it once in a while really makes you appreciate the little things of life–like hot water. 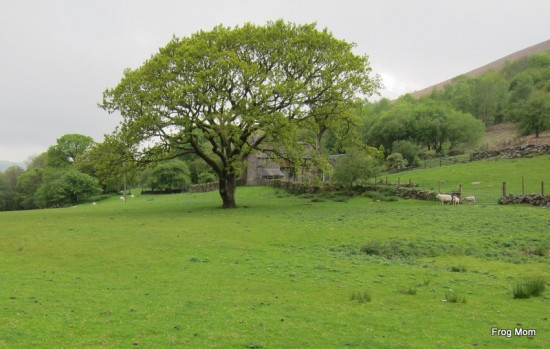 We started by a farm at the bottom of a hill. In a cul-de-sac by a pub, we’d parked the rental car and hoped it would stay fine during 2 days. Just before, we’d stopped by another pub to gather some “local intel” but the grumpy pub owner told us to go camping at the local campsite. Hardly useful in our case so we opened our topo map and asked him about the many “shake holes” mentioned on the map. What were they? “Duntgawinem”, he replied. Was it the Welsh word? He kept repeating Duntgawinem. It finally dawned on us, “Don’t go in them!” Couldn’t argue with them. We’d make sure to avoid the shake holes, whatever they were or looked like. That’s all the local intel we got before parking the car and heading up the hill. 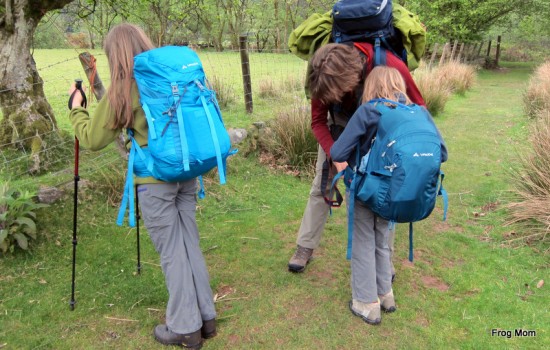 For the first time, my girls were carrying the same as us in terms of backpack-to-body weight ratio and we had to stop twice to adjust their backpack. It wasn’t easy finding the right balance between a waist belt tight enough to hold on bodies with no hips, and shoulder straps pulling too much on their narrow shoulders. In the end, we found a good compromise and started walking. I’d looked at the OL12 topo map many times and had a vague idea of where we should go – where water was. However that was easier said than done on a big hill that we were discovering as we walked. 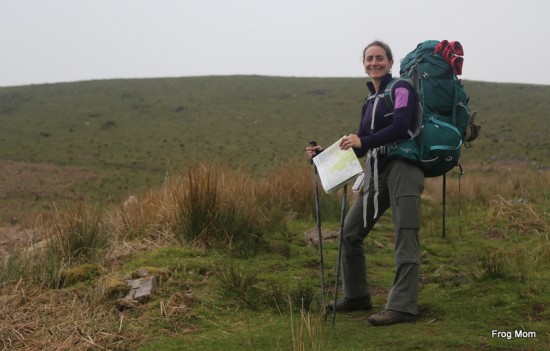 After following a trail for the first three hundred yards, we decided that we’d be better off cutting across the hill and making our own trail. Hopefully, there wouldn’t be any “duntgawinems” on the way. Up and up we went, me checking the map at regular intervals but moor land is pretty uniform on a map. It’s light brown with tiny green specks. The only useful measurement was the contour lines, telling us how steep or not our path was going to be. Judging by the map, we needed to go up a fair bit to reach the plateau and once there, look for water. Quite the water whisperer adventure! 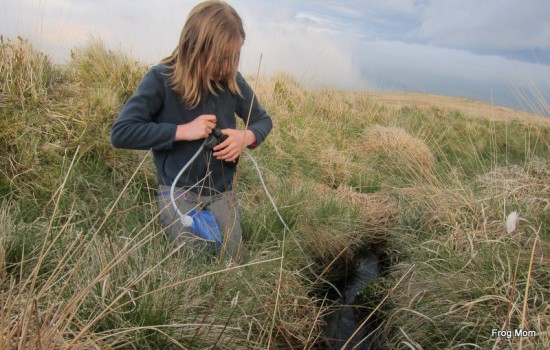 We found it! Oh, it was not the Rio Grande for sure. Just a trickle that moved enough to show us that it was alive. As soon as we found it, we also found that we were in deeply “boggy” terrain. While our quandary had been to find water, we had too much of it in the soil now! The clock showed almost 7pm so we did our best to find a flat-ish and dry patch to pitch the tent. Dinner had to be cooked! 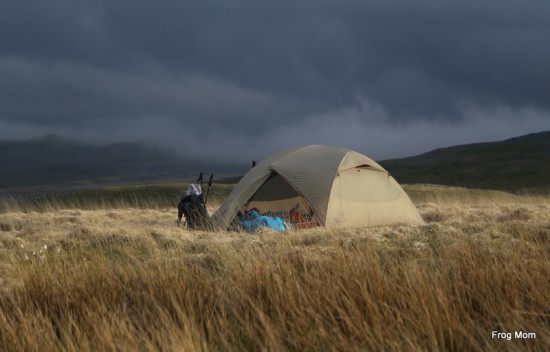 One of the girls helped my husband pitch the tent while the other one helped with dinner. All around us, massive dark clouds were obscuring the horizon, but our lucky slice of hill was warm and sunny thanks to a break in the clouds. Since we were high on a plateau, we watched curtains of white mist rise from the valley up into the sky. It was quite enchanting and had dinner not called, we would have stayed there gaping much longer. 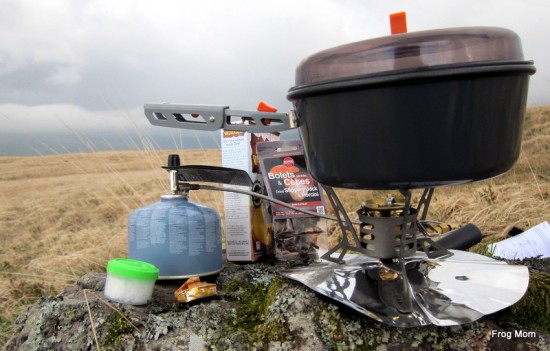 This was the kitchen. Basically, a rugged rock covered in moss where I’d open a foil circle and set up the tripod of our (brand new) gas cooker somewhat level. It took me a few attempts before firing up the gas stove but when I got it going, I immediately added the windscreen because the wind was blowing off the flame every 10 seconds or so. Water was heating up, dinner wouldn’t be far long. 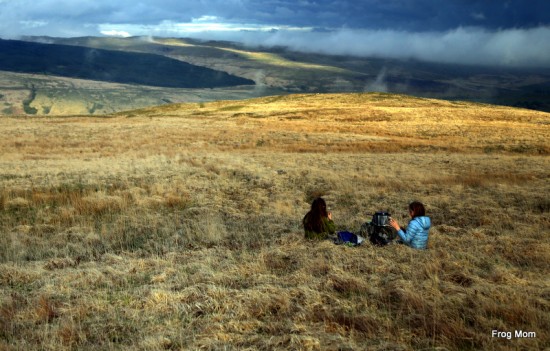 We were lucky. The weather was dry despite adverse forecasts and we even enjoyed a sunny evening on Black Mountain. While the water boiled, I prepped the ingredients for what I hoped would be a good dinner – polenta with rehydrated dried porcini mushrooms, chicken stock and fresh rosemary leaves, topped with strips of pre-cooked bacon. 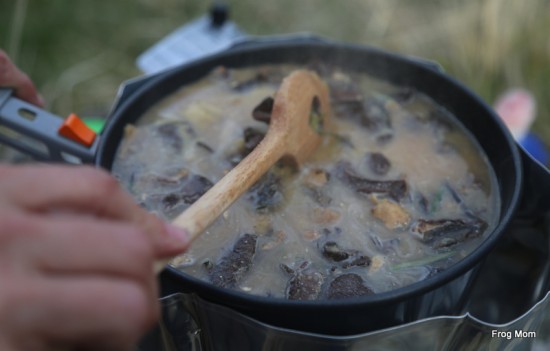 If you ever want to replicate that recipe, omit the rosemary. I used too much and it was chewy on the verge of medicinal. Also, don’t be shy on the salt shaker! Polenta doesn’t have very strong flavors. in the end, my girls’ verdict was that it was bland but edible. Sigh. And here I was, thinking that I was doing them a favor by avoiding freeze-dried food on our first dinner out. Would they actually be happier the following night? Bah, never mind. it was food and it was hot. 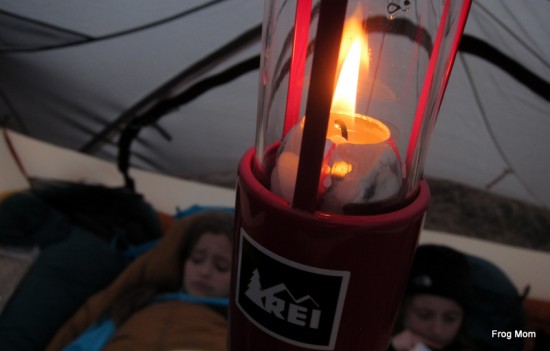 We went to bed by candlelight, listening to a chorus of “baaah baah baah” sheep posted strategically on every single mound around our modest tent.

The following morning was amazing. 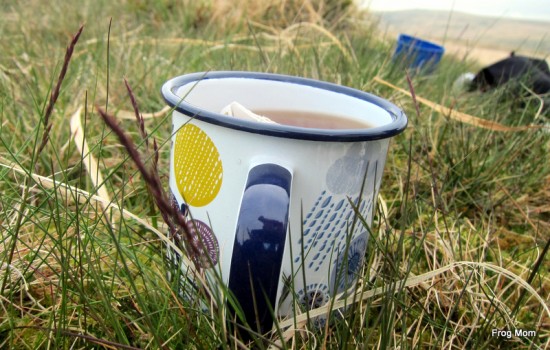 I’d never slept so well while backpacking. Three cheers for moorland as the best living mattress ever! Honestly, when you’re used to hard-packed ground and rocks from the Californian Sierras, this felt positively luxurious. Recharged and happy, we cooked a hot breakfast but again, culinary perfection would have to wait. Tragically for our porridge, the pot’s water refused to get warm enough for the steel-cut oatmeal to cook fully. Here comes the gruel, kids! 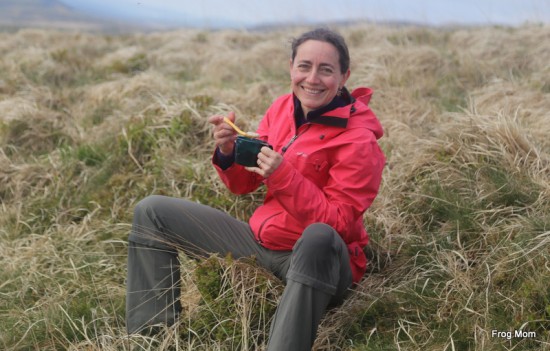 This concluded our first night. I’ll be more brief on the second one.

A bit further on the map and after a gloriously sunny day, we pitched our tent on the second night below a cliff by a gully. A small river ran through it and it looked just the spot. As predicted, this was freeze-dried food night. My girls immediately grabbed the packets snd started reading the list of ingredients, cooking times and number of calories per bag. 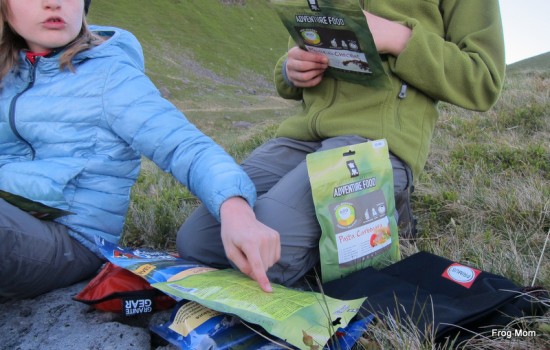 When you’re out in the wild, distractions are few and far between while waiting for dinner to be ready. By the second night, I feared that our gas canister would give up on us and couldn’t get the water to boil. Can you see a culinary backpacking trip theme here? 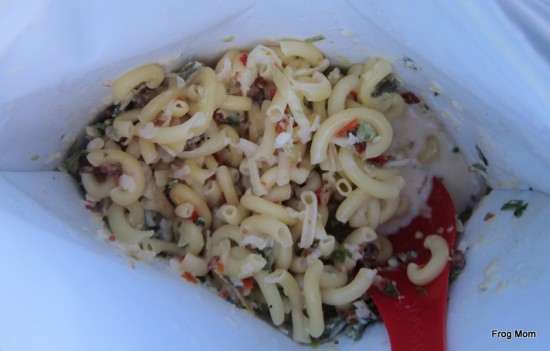 Freeze-fried pasta carbonara surely tastes great with boiling water, but with hot water, you can still enjoy the crunchy side of dried onions, as well as the liquid puddle tasting vaguely like cream at the bottom. Yum! 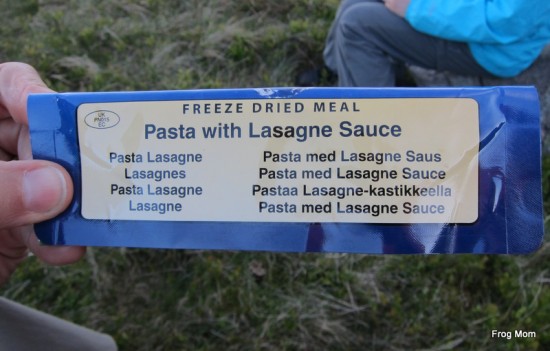 I couldn’t resist photographing this package, “Pasta with Lasagne Sauce” because it made absolutely no sense. Pasta with pasta sauce, what’s that? According to my husband, it tasted OK. We even tried dreeze-dried chocolate mousse but I won’t punish you with another freeze-dried photo. Suffice to say that the instructions were wrong about the amount of water (we quadrupled) and that it was sticky but quite nice. 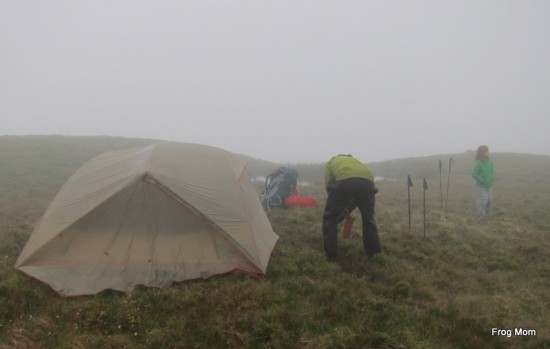 After an early night, we woke up to the thickest fog I’ve ever seen. We couldn’t even see the cliff 20 yards from us! Since the gas canister was empty, there was no point in eating anything. We better get back to the car as fast as we could. We still had a couple of hours of walking ahead of us but the fog sure made way-finding challenging. 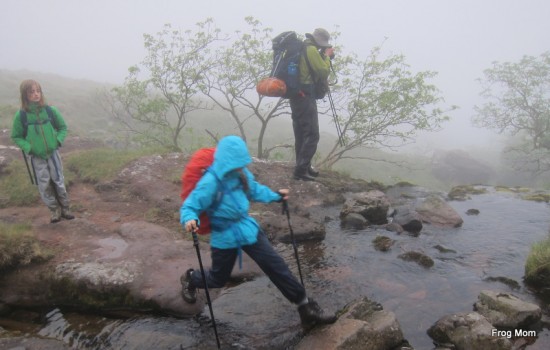 More eerily, sheep baahs now came from nowhere and everywhere at the same time which deeply odd without the visuals. Many cobwebbs that we passed were string of morning dew or string of water droplets, as the case may be. After a “Scottish shortbread” stop, we found our bearing by connecting the map to physical features around us, cut across the hill. Again, it was quite steep but my girls navigated it perfectly. 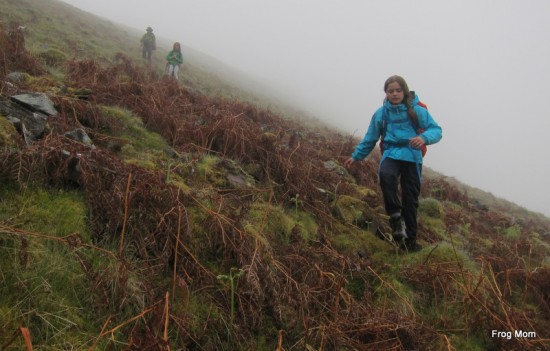 Our car was where we had left it and our girls were only too happy to get into a dry change of clothes. Despite the fog finish, they loved the experience and want to do it again. They love falling asleep in a tent in the middle of nowhere, listening to the gurgle of streams, the chirping of birds and the lazy baah of sheep. What can I say – who can resist that?