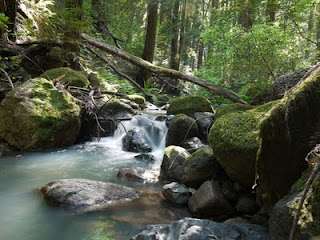 This wouldn’t be California without a winery with three swimming pools where customers sip chardonnay at the pool café listening to live Vegas tunes before visiting the museum filled with Hollywood memorabilia while kids relax post-swim in a “kid library” tee-pee with a view on Sonoma green rolling hills. This wouldn’t be Napa either without a stop at the bakery of a Michelin-starred restaurant that sells awesome chocolate tarts and only-in-Napa foie gras dog biscuits to enjoy at the outdoors patio. The biggest surprise though, was a redwood forest on a hilltop with a trail leading to a milky waterfall in Napa.

I swear, we initially planned to do a weekend of hiking and camping in Napa. Somehow, things took a different turn but the kids didn’t complain. They love swimming.

Archer Taylor Natural Preserve
High in the hills above the city of Napa on the western side, Archer Taylor Preserve starts at the end of a dirt road and dives deep into redwood territory. While I knew about the mountainous side of Napa (try Mt St Helena for a good workout!), I had no idea redwoods could thrive this far inland.

On Saturday a dozen adults and kids got ready and hopped in cars to reach the trail head at the end of Redwood Road, trail head where the kids begged us to stay because of a massive trampoline and two goats grazing around picnic tables. One of them was a “unigoat,” a goat with only one horn. We promised to spend some time after the hike.

The hike itself was short and sweet on moderately steep terrain down to the creek, then mostly level and gradually up to the falls. Since there is no clear trail map at the parking area, we wouldn’t have been able to find our way without a friend of ours who knows the trails and led the way.

Our loop to the lower Devils Well Falls was probably a 2-mile loop. For more exploration, other hikers report they can scramble up the lower falls to a second and third level of falls in a canyon. Not sure how that works with little kids so better stick to the easier lower falls.

At the end of the hike, we stopped at the trampoline and enjoyed some bouncing time before heading out and camping by Redwood Creek in the backyard of this friend.

Note: access to the waterfall is on private property of the Land Trust of Napa County and to come here you need to join a guided tour or obtain permission to hike on the Preserve by contacting caretakers Bill Albrecht and Anne Ledvina at least 24 hours in advance at 707-254-0996 or by e-mailing.

Bouchon Bakery
“If there’s a line out the door, it’s a good sign” says my dad, who always gauges a restaurant by how busy the waiters are. If that holds up in Napa, Bouchon Bakery in Yountville deserves its 4.5 stars on Yelp and a place in the pantheon of gourmet bakeries.

Tipped off by a friend, we showed up at 10am on a sunny Sunday with 5 kids and 4 adults in dire need of breakfast. The line already extended around the bakery – ominous sign!

On this quiet posh strip of the Napa Valley, the famous French Laundry is only a few doors down the street and Bouchon Bistro right next door, a total of 4 Michelin stars for celebrated chef Thomas Keller who owns them both. There was no way we were missing out on Bouchon Bakery croissants despite the 40-minute line.

So the kids sat at the outdoors patio tables while we adults mused on what we’d get once inside – the line is not only long, it is slow. “I want to mortgage my house for this croissant!” said my friend Kazz who was daydreaming on the Michelin-starred treats. I suggested a Pinot-infused strawberry compote turnover if there was one but there wasn’t one.

While we all fantasized on extravagant Napa takes on classic bakery items, the line slowly made its way and we were faced with the impossible choice: what’s for breakfast?

As for the extravagant Napa take, the one item that  wins the cake  was the foie gras dog biscuit. Now that was over the top, even if I actually regretted not buying one for myself at lunch time. In the pastries department, all were utterly delicious. The chocolate bouchons that give their name to the bakery are totally worth the line, as are the rhubarb-strawberry macarons.

Located in Geyserville right off 101, the winery is smack at the entrance of the Alexander Valley. We arrived around noon and snatched the last pool passes available. From the Yelp reviews I’ve read, people line up at the gates on weekends, run to secure a poolside chair and send their friends to buy pool passes. Our experience, on the reverse, was pretty chill. We just walked up to the main desk, bought our passes, got paper wrist bands and were handed plush terry towels for the pool as well as free combination locks for the locker rooms.

At $15 per adult and $10 per kid, it’s a better deal than flying to the Mandala Bay for the day and lifeguards guarantee there are no drunken idiots messing around the pool. For that price, you get to enjoy a full day of Sonoma summer sun, clean pools and live music on weekends. The pool capacity is topped at 184 people but lots of guests just lay their towel down and go wine tasting. Kids can swim their hearts out!

Since picnicking is not allowed, the grounds are super clean (no bags of Cheetos flying around, thank you) but obviously when you’re hungry, you need to buy food there. Aha. Which we did. Our kids asked for seconds of the Pizza Luigino, a simple tomato pizza with mozzarella. Delivered directly to our towel on the lawn, it tasted surprisingly good.

A pitcher of rosé on ice for the grown-ups makes a refreshing pool wine that doesn’t club you right away. As for the cabines (cabanas), I really don’t see their point. You already have access to free lockers and the cabines are not Las Vegas-style sheltered lounging areas by the pool. They’re changing rooms with keys. I say, save $75 and splurge on something else. As in …. a replica of The Godfather desk? I’m kidding.

The museum is the last must-see stop at the winery, a collection of costumes, set items and Academy awards (including typed notes for the award hosts) that will delight movie buffs. From the striking window case with the Dracula bride lace gown and Count Vlad stylized armor, to the Apocalypse Now displays with period off-screen shootage, the first floor is meant to make you drool in awe before you climb to the second floor.

The second floor welcomes you with the desk and armchair of The Godfather, two pieces of furniture that stop everybody in their footsteps before their jaw drops. Past the initial shock, you can drift to the wall of Academy awards – real ones – and walk around the promenade to the last room dedicated to Marie-Antoinette.

I find it really cool that despite the “Francis Ford” part of the winery, the father displays his daughter Sofia’s work on an equal footing with his. She also has a pizza under her name. What more could a daughter ask?

The last room features two incredible scaled model boats that were paraded on a fireworks background in a battle scene on Versailles’ grand canal in the movie Marie-Antoinette. Kids were all over them – understandably and we had to pull them away from these marvelous constructions.

The same room happens to have a nice selection of gifts for children, which helped in the diversion.

You can never tell what will happen when you go camping in Napa without a reservation. You may end up pitching your tent in someone’s backyard, change itinerary and live the high Wine country life for a day. Not a bad way to kick off the summer!