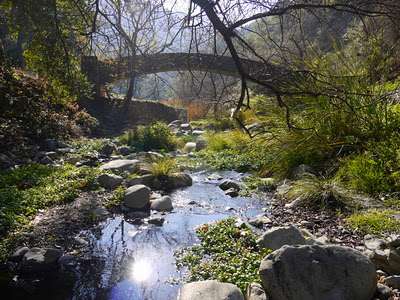 > Winter Hike at Alum Rock: A Canyon with a Smelly Past

Winter Hike at Alum Rock: A Canyon with a Smelly Past

Hot springs and an alien meteor in San Jose? Once a fashionable Victorian spa resort, Alum Rock Park is a narrow canyon whose steep ridges overlook a year-round creek traversed by 21 natural mineral springs. Some of them are hot springs whose sulfuric content exudes a particularly eggy smell but these minerals are exactly what made the canyon so popular in the early 1900s. Physicians proclaimed the healing virtues of these waters and a resort was born, complete with water pagodas and a steam train. As for the meteor, it was a big boulder of manganese that locals claimed to have come from outer space. However capitalism got the better of the boulder when it was sold for its “earthly” metallic content during the first world war. Today the “meteor” has been mined, the Victorian spa is long gone, but Alum Rock remains a fabulous Sunday walk for all ages. Completely underrated, this park features beautiful trails under mature oak canopies and a series of arching bridges and neo-Roman spring grottos along Penitencia Creek.

On a clear and brisk Boxing Day, our family set off on the wide and paved Woodland Trail behind the Youth Science Institute and started our ascent towards the South Rim trail. Two hundred yards ahead, a big stag crossed the trail and a biker stopped to watch. It felt good to be out!

The stag didn’t linger but we enjoyed the sight and kept an eye out for other “beasts” from then on. However it’s not an animal that motivated our next stop but a vegetable and an exotic one at that.

Indeed right after the junction with South Rim trail, we noticed a few of these peculiar pine cones on the leafy trail next to a fair number of horse chestnuts. Immediately our girls bent down to get a closer look. So different, they are so different. Alum Rock was getting intriguing.

Our ascent continued and after several zigzags we reached the rim and a breathtaking view of the Santa Clara valley. At that point, the hardest part of the hike is over and all you need to do is keep on walking and enjoying the views.

Wish that we could have kept on until
Arroyo Aguague Creek but half of the South Rim Trail is currently closed for repairs and will not reopen until spring 2012. As a result we left the rim at the junction with the aptly-named Switchback Trail and watched our step to get back to canyon level. A few exposed sections made me think this would be a nightmare for people with heights issues.

Now at creek level with rumbling stomachs, we spread our picnic on a creek-side table and had lunch. Before long one of our girls blurted out “Who farted?” Ah, the joys of sulfuric waters do reside in that eggy smell now, don’t they?

That’s how we introduced the concept of mineral springs to our young crew. We explained the sulfur and the rotten egg smell, the other minerals, the “miraculous” virtues of the water in Victorian days. Were that we had thought of packing egg sandwiches for lunch.

However to prove the point, we skipped a few rocks across the creek and showed a grotto out of which came milky blue waters to our girls. “It looks nice but it sure stinks” concluded our 6-year old, wrinkling her nose. In all fairness and on the scale of eggy springs, Alum Rock’s springs are mild but to a young sulfur novice the smell can be overpowering – just be warned.

Momentarily leaving the springs behind, we walked up Penitencia Creek Trail to the bridge over Arroyo Aguague Creek and again crossed on rocks (the bridge is currently closed) to look at the stone work on the other side of the bridge. I really like the round circular steps leading up to the bridge, they blend so well with the romantic mood of that ferny canyon.

Since the area was technically closed, we backtracked and decided to spend some time exploring the springs and their grottos. Now you’ll notice – when you go – that most of the springs have steps leading down to a sort of square “bathtub” area.

Initially I thought that bathers came in white robes to enjoy the springs al fresco but I’ve since read that the spring waters were pumped up to bath houses and enjoyed in large copper tubs. The steps were only built to show the location of the various springs. Too bad, I prefer my earlier version but the water level does seem ridiculously low – not to mention the yuck factor of the algae and other slimy things floating in the water.

We explored both sides of the creek and walked back to the Youth Science Institute in front of which a Greek-style pagoda shelters one of the park’s mineral springs – as a water fountain. “Let’s bring some miraculous water home!” I suggested to our girls. And so we emptied our water bottles and filled them with liquid elixir the virtues of which we’ll surely feel very soon.

Last but not least, our girls enjoyed some swing time at the playground before leaving. The sun was now high in the sky and this felt like a perfectly balmy winter day – just the reason why winter is one of my favorite seasons in the Bay Area. Next time you go, don’t forget to fill up your water bottles before you leave. You never know – the minerals might still be there.