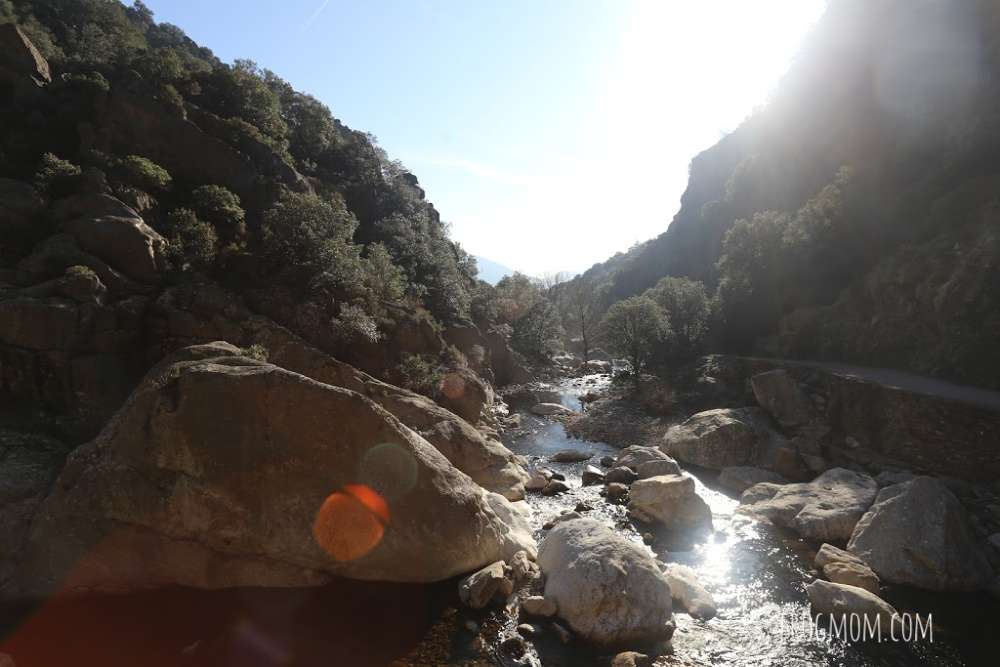 Ever since I’ve been a kid, we’ve hiked the Gorges d’Héric in Hérault, southern France, with my family. On Boxing Day 2018 (the day after Christmas), loyal to family tradition, my dad, my husband, my oldest daughter and I went for a hike at the Gorges d’Héric. My youngest, too weak that day, stayed behind. If you’ve never been, the Gorges d’Héric offers spectacular scenery in the Espinouse and Caroux mountains, less than an hour from the Mediterranean Sea. While the place is hellishly crowded during summertime, it is a wonderful and invigorating nature day out in winter. 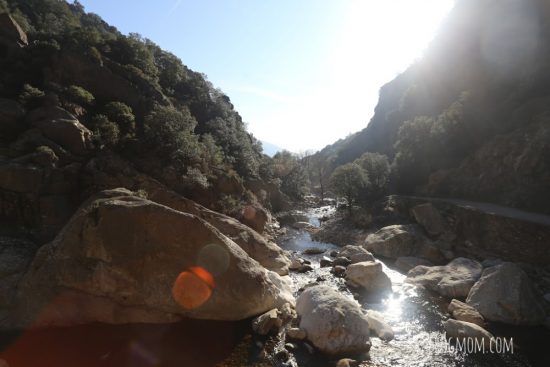 We left the coast and Béziers when it was so overcast that we thought it was going to rain. “Scattered clouds, dry and sunny,” assured the weather forecast, so off we drove away. As befits the day after Christmas and its chaos, we didn’t leave very early and in fact, left right before lunchtime without a picnic. Though my father offered to pack along a bottle of red wine (for the hike), we declined and decided to buy lunch en route.

Averting a Picnic Disaster – Or So We Thought

Buying lunch en route is great, except there aren’t too many villages between Béziers and the Gorges d’Héric and the day after Christmas isn’t exactly peak tourist season. Would we find any boulangerie pâtisserie selling quiche lorraine? In Hérépian, tiny village of bell foundry fame, not one but two bakeries were miraculously open. We were spoiled for choice! Or not. My husband came back from the first bakery with a somber look. “No quiches, they sell only pizzas.” Not a happy bunny. The second bakery sold quiches lorraine (phew) as well as galettes des rois, a French traditional almond paste cake celebrating the epiphany. I was over the moon as each galette des rois comes with a surprise token hidden inside and whoever finds it gets to be king or queen for the day. It is also very delicious when done well.

We were officially ready to hike.

Gorges d’Héric Without the Crowds

The parking lot at the bottom of the Gorges d’Héric was free (bonus of off season hiking) and we easily found a spot. Two cars over, a couple of guys were unpacking their climbing gear as the Caroux is a famous climbing spot in southern France. They walked away with harnesses, climbing shoes and miles of rope on their packs while we modestly carried quiches lorraine, galette des rois and basic swimming kit. I won’t say that I wasn’t slightly envious of their upcoming adventures. 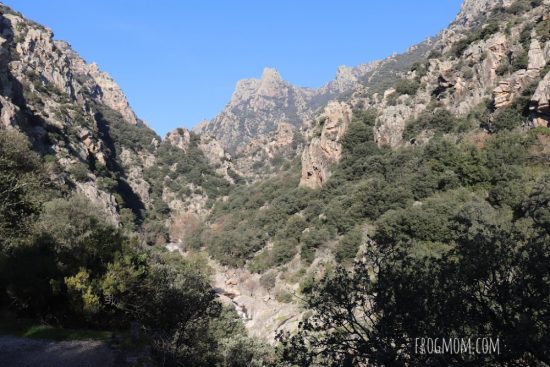 As predicted by the weather forecast, the Gorges d’Héric were literally basking in sun. Not a cloud in slight. It was even warm  and we quickly removed a few layers to walk the uphill trail.

It’s all in the name. In the midst of the Gorges d’Héric flows a glacial mountain stream called Héric and if you follow the clear water upstream, you find a tiny hamlet at the top of the stream also called Héric. Until 1931, this hamlet was only accessible on foot and harsh snowy winters must have made the trek very sketchy for its inhabitants. In the 19th century, up to 30 people lived there, herding sheep, growing sweet chestnuts and harvesting honey. Children ran down the mountain to the closest school an hour away and funerals were celebrated in the next valley over in another village, coffins being carried on men’s shoulders up steep rocky slopes to the church. Imagine that. 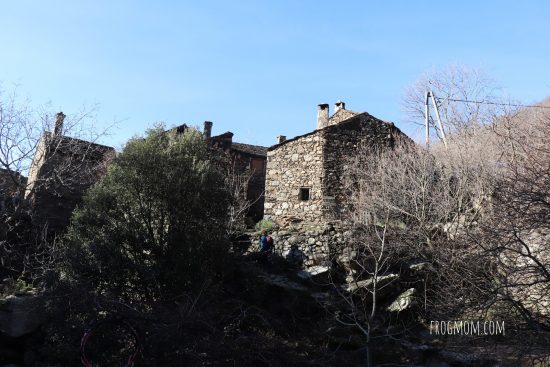 In 1931, Héric got a big upgrade and a paved road. Of course, the stream proved a logistical hurdle and as you walk up the path, you will note four consecutive bridges. They were built over the stream to access Héric. With this paved road, now the main hiking trail, the hamlet officially entered the 20th century, got connected to electricity and lost most its inhabitants. Between 1964 and 1982, population dropped from 30 to 1.

With time, Héric has become somewhat of a ghost hamlet and today, the hamlet counts only three year-round inhabitants. Summertime visitors help maintain this historic mountain hamlet but year round, the real hero is an old granny who keeps the hamlet alive. She runs the open air buvette (snack bar & café) under wild fig trees and thanks to her, Héric has become a hikers’ destination. It was, in fact, our destination on Boxing Day. “Let’s walk to the hamlet for a coffee,” my father said. We always do hike to the hamlet for coffee.

On the way, we spotted the two climbers who had left the parking lot before us. They were at the top of a crag, the lead climber comfortably anchored and waiting for the second climber who was navigating an overhang. 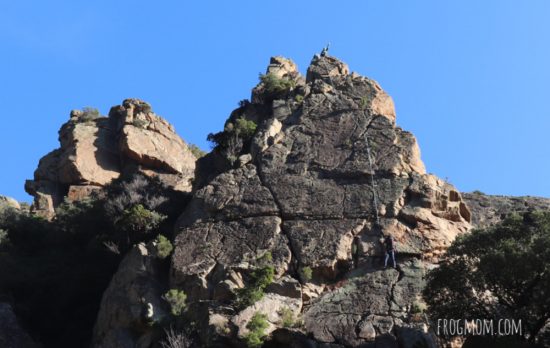 The Caroux offers a variety of trad and sport climbing routes, mostly trad, and is a favourite day out for the Béziers mountain club. Though routes are rated 3 (super easy) to 7b (Spiderman/woman), most routes are 5B to 6c which makes them accessible to seasoned climbers.

With my father and his beret leading the way, we followed the stream up to the point where the road leaves the gorges to zigzag up the mountain to the hamlet. 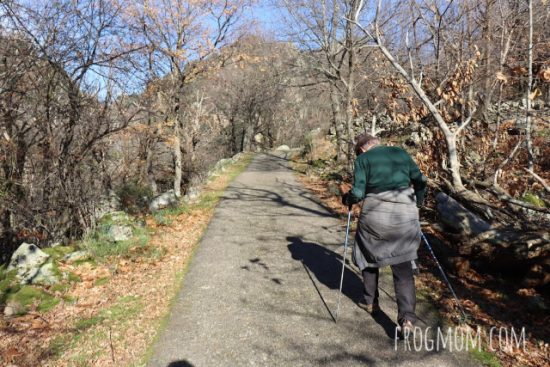 At that point, we decided to stop and celebrate the galette des rois before the hamlet. A flat rock provided the ideal table to slice the galette in 4 using our Opinel folding knife. 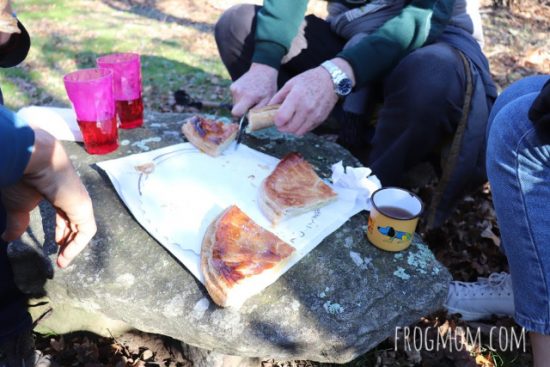 The game is always to guess who is going to get the fève (ceramic token). We looked at each other suspiciously in turn. Was it my father? He kept chewing and didn’t show any sign of biting on a ceramic fève. Was it my daughter? She giggled nervously and claimed she didn’t have it. It wasn’t me for sure. My husband, impatient, cut open his slice and didn’t see it. Where was the fève? Was there a fève?

By Jove, you’ve never seen a French galette des rois without a fève. It would be a massive ripoff and reason enough to return to the bakery and give them your heartfelt opinion. Puzzled, I grabbed the folding knife and stabbed my slice with its tip, wondering if the fève was so small that I couldn’t find it with the naked eye. I quite literally slaughtered my slice to no avail. Both my daughter and my father looked at me in between fits of laughter.

Where was the bloody fève!!!?

I was plotting the biggest bakery temper tantrum ever when my daughter couldn’t hold it any longer and burst into laughter, revealing the fève hidden in her fist. My father had found it first, smuggled it to my daughter who had kept it hidden from me all the while. Apparently, my husband was into the secret too and had played along. Rascals, the whole lot of them! 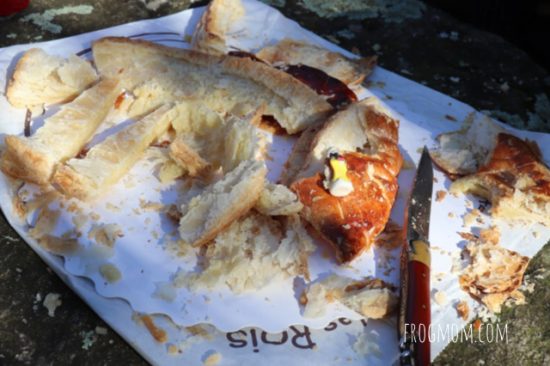 For the record, the fève was one of the three kings of Orient, a rather nice fève for a really unimpressive galette, tastewise.

After the galette des rois episode, we resumed our walk up the mountain. 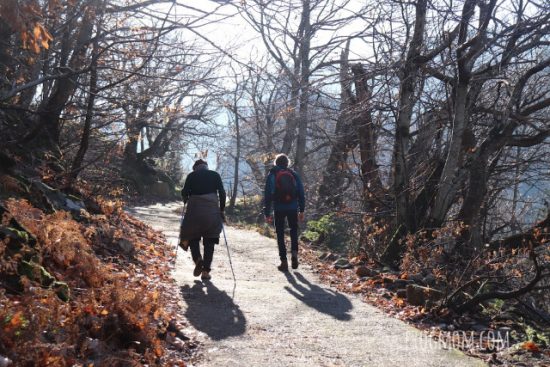 I love how the winter sun shines a particular silver light on bare trees in nature. It magnifies the cold feeling of leafless branches and summer-burnt ferns. 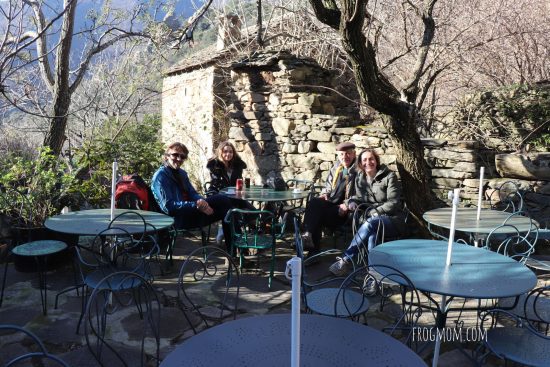 At the buvette, we ordered coffee for my husband and my dad and a coca cola for my daughter. After drinking her coca cola, she turned to me.

“It wasn’t very fizzy.” She paused. “Could it be the altitude?”

Hèric is grandly at 520m above sea level, which makes altitude un-fizziness quite unlikely.

We both agreed that her coca cola bottle was probably not a recent vintage.

“Hmm.” She didn’t comment any further but made a mental note the Héric buvette granny doesn’t sell the fizziest coca colas in the world.

Wild Swimming at the Gorges d’Héric

Last but not least, we had to jump into one of the many inviting pools created by the stream cascading down the mountain.

My dad knows them all like the back of his hand and I sometimes hesitate, impatient to jump into any pool.

“Wait a bit. A little further around the bend,” he says. 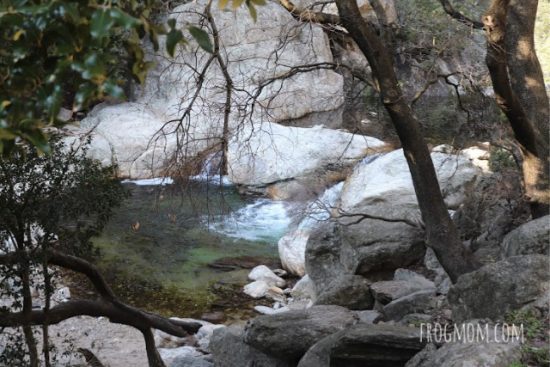 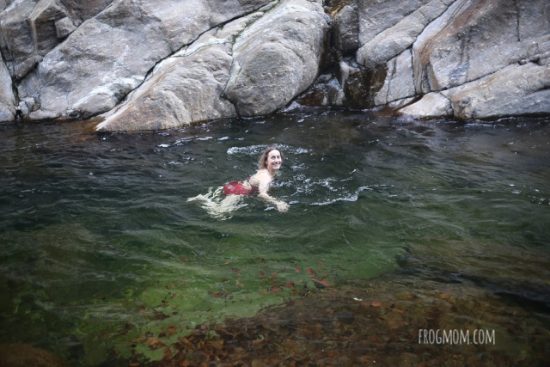 I went in first, thrilled to swim in one of my favorite spots on Earth, surrounded by tall boulders, trees and a view on mini waterfalls.

On the fence initially, my husband changed his mind, couldn’t resist a dip and went in after me. 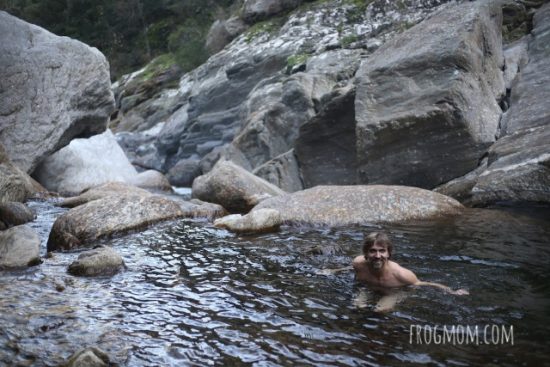 Isn’t the spot just gorgeous? I loved that the brown colors at the bottom of the pool were dead sweet chestnut leaves and not rocks, making sliding into the chill water a very comfortable affair on the feet.

Thus ended our winter hike and swim at the Gorges d’Héric. If ever you travel through Béziers, do save a half-day to walk up the gorge to the hamlet for a drink. It’s well worth the trip.