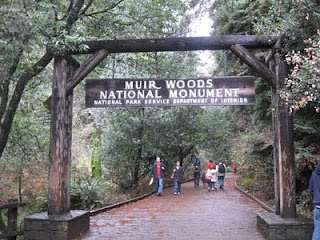 December 21st, 2010 was an auspicious and cold date. Combining the longest night of the year with a solar eclipse, a full moon and almost clear skies, it was a night to remember and Muir Woods National Monument put on a great program to welcome families under the redwoods after dark. Twenty-two years old, this Muir Woods tradition attracts people from all over the bay and this year saw over 700 people facing cold weather and tricky parking to join the celebration. Beyond the actual organized activities, it was a unique opportunity to stroll in the famous redwood groves after hours – Muir Woods usually closes at sunset. I took my brother’s family (him, his wife, a 2.5-year old and a 10-month old), my own girls (5 and 7 years old) and off we went to discover Muir Woods after dark. By a happy coincidence, we met my friend Beth on the trails, the person who initially told me about this event three years ago. She’s a veteran of Muir Wood winter solstices (6th consecutive year) and was accompanied by her 7-year old twins, her 11-year old and her mother. As you see, it’s a celebration for all ages.

Since the activities started at 3.30pm, we got there a half hour early, hoping to park without struggles. What do you know, the main parking lot was already full, the overflow lot too, so we parked further down the road. At the entrance, rangers were already busy engaging visitors in crafting solstice crowns with vines and branches. Druid solstice traditions were not far in the air!This was my brother’s family’s first visit so we hit the trail and decided to make our way slowly on the main path until Bridge #4. That way, they’d get a visit of the woods and the winter solstice. With a 2.5-year old walking, I wasn’t sure what to expect in terms of pace and I wanted to be back at 5.30 pm for the shadow puppet show. Well clearly, I didn’t need to worry. My nephew was a trooper and thanks to my goofy brother who played tag with the kids most of the way, the little guy ran ahead of us the 4 miles (out and back). Not a single complaint. Not bad for a pint-size kid!

The woods were misty, fog was rolling in and the ground smelled of damp dirt – my favorite redwood weather, besides rain. Though the childen were more interested in running than admiring, us adults soaked in the meditative atmosphere of the redwoods – until my brother started goofing up again – next to the “Quiet zone”! Ach, having a goofball in the family sure isn’t quiet. His wife shushed him immediately but lo and behold, the “Quiet zone” at Cathedral Grove resonated with the not-so-distant noise of an engine revving up on the hill. We looked at each lother and laughed. Someone else better be quiet!

As we were approaching Bridge #4, I decided to trail off and explore the Alice Eastwood trail (for my family hiking guidebook – more on that in 2011) while the others went to Bridge #4. An hour and a good sweat later (I ran to catch up with them), I found them retracing their steps after Bridge #3. By then it was almost dusk and we crossed Redwood Creek to explore the trails west of the creek. In the distance, I saw some faint lights glowing on the ground. The luminarias were being installed! To guide visitors through the redwoods for the winter solstice, park rangers lay white paper bags with LED tea lights on the ground. Those create a magical glow at foot level as you progress through the forest and it’s a lovely touch. That’s when we crossed paths with my friend Beth. My girls were so happy to see their little friends that they took off on the spot! It was my first time meeting someone I know to the trails and I was elated. I also got to meet Beth’s mom, a charming grandma who was discovering Muir Woods with her daughter and granddaughters. All of us walked back to the entrance where the real winter solstice action was about to begin.

Now comes an interesting tidbit. Where most parks like Muir Woods would try to increase their parking capacity to accomodate more visitors, Muir Woods just reclaimed 2,000 feet off the main parking lot to restore a meadow by the creek. I can’t say that it’s going to help with transport but I love the idea of ripping off parking surfaces to give way to natural environments. “We are very progressive!” said the ranger who told me about the meadow project. Until the hard surface goes away, the area’s being used for pedestrians and on Tuesday, that’s where a stage and several fire pits were set up.

Realizing that dark was almost upon us, I rushed to the gift store to get flash lights for my junior troops ($8 each with a Muir Woods yellow pattern). To comply with the rangers’ requirements not to use harsh lighting that night, the flashlights were already protected with a square of red cellophane. It’s hard to believe but it’s the first year the gift store was selling these little guys. To think of all the flashlights they could have sold in 22 years!

Back at the entrance, fires were going strong in the elevated pits and a the Loosely Knits, a group of musicians with a penchant for old world celtic-flavor music, were performing inside the visitor center. I saw moms bouncing their babies to the rhythm of the music, older kids completely in awe of the musicians, and people just content with standing around the little group to enjoy a nice musical moment.

Outside, I rejoined my group and we positioned ourselves for the shadow puppet show – at the last row. Unfortunately the amplification system was terrible and we couldn’t hear much at the back (or just bits and pieces). After a few winter solstice songs (come on, you know “O Redwood Tree” and “I’m dreaming of a winter solstice”, right?), Ane Carla Rovetta told a story she wrote about the creation of the mountain behind Muir Woods. Ane is a naturalist and artist who specializes in teaching about nature through storytelling and art. Sadly I couldn’t hear everything at the back but I loved what I heard about the role of native wildlife in the creation of the landscape.

As the shadow puppet show was next, I crawled to the front with the two youngest so they would have a chance to fully enjoy the show. The ground was wet, dirty and cold but who cared? There were at least a dozen kids and caregivers waiting for the show. The puppets didn’t disappoint and included the local animals: moth, mountain lion, bat, snake, owl – oh yes, and a park ranger. Now the story itself could have used some Ann Carla Rovetta pixie dust. It went on and on about how the Muir Woods now served healthy food, and how its carbon footprint was reduced because the employees carpooled and trash was composted or reycled. I mean, come on.

If you’re going to perform a puppet show at 6pm in front of a family audience, don’t give them the cafe’s menu. Kids want a real story! With all the nice shadow animals and the great voices that were animating them, there was so much potential for a good story. Why talk about visitor facts only adults care about? Though I loved everything else, that story about the cafe (it came back twice at least) just didn’t have its place there.

We had reached the limits of our little ones’ attention at the end of the show when a few drops started falling. It wasn’t really raining but it felt a bit colder and the kids were hungry for dinner. We cleared the way and the kids rejoiced in using their flashlights to come back to the car. Now that’s an investment I know will come in handy when we go camping next week!