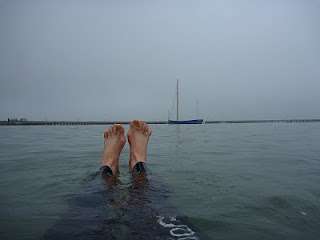 > Winter swimming in the San Francisco Bay: is it cold?

Winter swimming in the San Francisco Bay: is it cold? 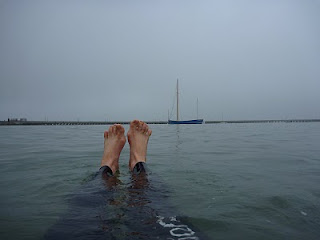 It never fails. As I get out of the water at Aquatic Park with a swim partner and we cross the sandy beach to reach our flip-flops, a couple of jetlagged tourists having strayed from Fisherman’s Wharf walk up to us with a complacent smile and pop the million $ question “Is it cold?”

I wonder, what do they expect? It’s 42F outside. They are bundled up in all their fleece layers, arms crossed over their chest to keep warm. We are either in speedos & swim caps or in wetsuits and dripping wet. It can’t really be that toasty in the bay now can it? We always chuckle and reply with bravado that “Oh no! It was great.” Which doesn’t exactly answer the question.

Yes we want to convince that it’s great to swim in the bay on a windy January morning but the fact is, you better get your strokes going if you don’t want to experiment with hypothermia in salty waters. After I completed my Alcatraz challenge last September, I wondered if I would keep swimming in the bay over the winter.

There were rumors about frigid waters. Seriously. Winter swim events are notoriously for swim nuts. The iconic Polar Bear challenge (see 2008 results here) of the Dolphin Clubrewards people who swim at least 40 miles between December 21 and March 21 in the Bay. If you do, you’re honored as an official Dolphin Club Polar Bear.

The South End Rowing Club (SERC) Alcatraz Swim on New Year’s day (starting the year bright and early before 7.12am) gathers a number of yellow caps in speedos or criss-crossed black swim suits. Oh the joyous sight of them jumping off the Hyde Street Pier wooden railing down below!

Now, I am not (yet) a Dolphin Club or SERC member – although my heart would go to the SERC – but swimming in the San Francisco Bay is sort of addictive. Sure I have the Farmer John wetsuit and wideview mask-goggles and might as well make good use of them. But I also like the feeling as you make your way to the opening of the cove to catch a glimpse of the Golden Gate Bridge on your left and Alcatraz on a backdrop of Marin rolling hills across.

I kept swimming through October when the days got shorter but temps were mild, November when autumn settled in and flocks of birds kept diving in the cove because of an exceptional sardine run (tasted fishy too), December when the rain showed up and sea lions playfully joined swimmers, January when the heavy storms made for rougher conditions and sea lions went to Oregon, and February when it’s getting warmer and pelicans are the only bystanders with seagulls and fishermen.

It still tastes pretty fishy but at least there’s no risk of becoming the target of a steep-dive attack from a hungry bird. March will be the unofficial kickoff for the swim season for Alcatraz contenders. That’s when training transitions from the heated swimming pools to the bay.

Two Saturdays ago diehard “crowds” at Aquatic Park were swimming laps along the buoys. That’s dedication. If I was swimming laps, I’d much rather do it in a pool. I always go around the cove, sometimes cutting across but always getting to the opening.

Now, to the real question.

How cold is it really in the water?

Turns out, you can find out the water temp the easy way, the digital way or the Michael Phelps way. The easy way: dial 1.866.727.6787, then station code 010 for wind speed and air/water temps at the GG Bridge.

The digital way: check the NOAA web page for the port of San Francisco.

The Michael Phelps way: there is a thermometer in the water hanging from one of the buoys under the ship Balclutha. Just swim to the buoy, poke around in the water and you will find it. I heard it was broken in January. Hopefully it’s been repaired since.

Greg and Laura showed me. Greg is a SERC member and knows all the Aquatic Park insider gossip, as in “last week a sea lion tried to bite so-and-so” or “there’s this new guy who swims at Pier 7”.  Laura is an enthusiastic swimmer who swam with us with Leslie’s Swim Art.

Last time we checked the water temp was 51.7F (just under 11C). Yesterday it was 55F (roughly 12.8C). What do you think, is it cold? It’s never going to be tropical anyway so why bother asking? Just enjoy the swim. It’s quite a thrill.

2 thoughts on “Winter swimming in the San Francisco Bay: is it cold?”