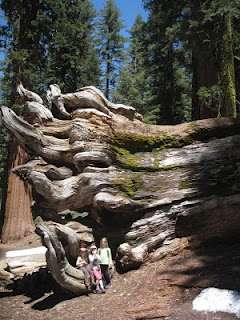 > Yosemite at Wawona, where the Giant Sequoias grow

Yosemite at Wawona, where the Giant Sequoias grow 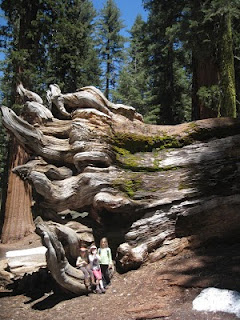 “Where is the tree that you can drive through?” ask most visitors. Answer: at the Mariposa Grove of Giant Sequoias in Yosemite National Park. However you and I can’t drive through it. The tree fell in 1969 because the driving-through hole actually damaged the root system. There. You can enjoy giant sequoias up or down but no messin’ up with our green friends these days. Just walk through, relax, and reflect on how small we are. You may even learn cool forest stuff along the way. Then you can call it a day at the terrace of the Victorian Wawona Hotel sipping your drink that night and marvel at the starry sky. Here is to Yosemite’s forest monarchs. Respect.

As much as I love the Yosemite valley and its gorgeous granite waterfalls, it’s no mystery that from spring to fall the valley attracts big crowds and even trafic jams. With almost 4 million visitors in 2009, the park is uber busy year round and the campgrounds’ popularity results in rare spots to snatch up six months in advance. 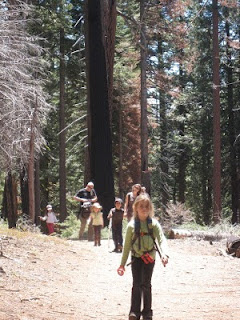 Despite the numbers, all you need to do is to stray from the main trail a quarter mile to find peace and tranquility- or head to other parts of the park such as the high country of Tuolumne Meadows or the southernmost portion of the park, Wawona. Wawona is where the Mariposa Grove of Giant Sequoias is located, home of the largest trees on earth and one of only 68 registered groves of these monster trees in California. How monster can they be? Not as tall as the coastal redwoods but if superlatives are you thing, giant sequoias are no less than the largest living beings on earth and can be as old as 3,000 years. 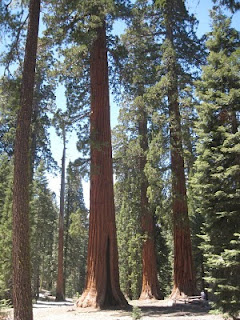 Kids will love that. Extreme old age, size, it’s all cool stuff to impress. Plus, there might be an ice cream reward at the end so that’s extra incentive to stick to the trails.
Your visit of the Mariposa Grove of Giant Sequoias starts at the parking lot on a wide paved road that ascends this side of the mountain during roughly 2 miles and culminates around the Mariposa Grove Museum. Unfortunately the museum was closed over Memorial Day weekend when we visited but the upside of the winter lingering on was that we found sizable fields of snow on the ground. Snowball fights in groves of giant sequoias? Bring it on! 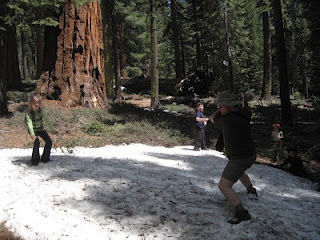 After the hike, we all caravaned to the Pioneer Yosemite Historical Museum at Wawona, a family favorite. Right at the entrance off the parking lot is a general store that sells strawberry slushies (amongst other wonderful things such as Yosemite key rings) and our kids didn’t need to hear that twice. It was a hot day and the 5-mile hike was a lot for them. 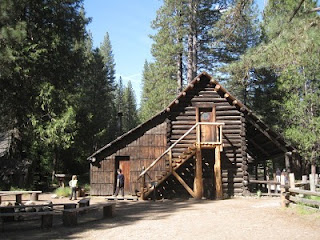 Getting to the Pioneer Yosemite Historical Museum was easy since it starts at the end of the parking lot. That place really deserves a shout out. It’s an outdoors museum consisting of several historical structures that were spread throughout the park and moved to this location in the 50s and 60s. 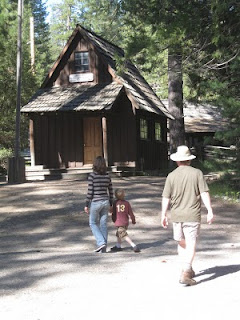 There, you will find a covered bridge (that reminded me of the one in Beetlejuice), a barn with old horse-drawn wagons, a powderhouse that doubled as a jail, a Wells Fargo office, a blacksmith shop, a ranger patrol cabin and of course, log cabins in the best pioneer tradition.
Walking around is lots of fun and you can peek through the windows – only to wonder where the furniture is gone before realizing that there wasn’t much furniture at all back in the days. This historical interlude completely re-energized our junior troups and as a group, we walked over to the Wawona Hotel, just to check it out. The velvet-heavy Victorian style lobby was really a riot and some of us wished we were staying there, just because the Saturday barbecue menu looked amazing. We weren’t though. 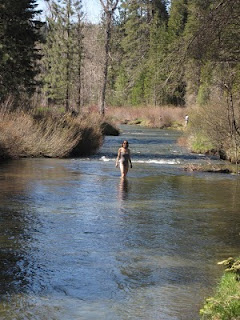 We were camping at the campground closest to the park’s entrance, Summerdale, a place described as “pretty in its own right despite the proximity to the highway” by Tom Stientra’s California Camping guidebook. Honestly the place deserved better than that. For our kids (12 total, 7 families), exploring the river sides, their fishing opportunities or hiding options, was the best vacation they could have had. We let them play, unsupervised and enjoyed adult time by the campfire. I couldn’t resist a dip, as did two other friends. Sure it was snowmelt but it was still the best remedy after a hot hiking day under the giant sequoias.
Next time you go to the Yosemite in the summer and decide to go south, pack a swim suit. There are good swimming holes next to Summerdale and in Oakhurst along the Lewis Creek National Scenic Trail.